Daniel Negreanu won the World Series of Poker Asia Pacific Main Event after dominating the final table of the event from start to heads-up against Daniel Marton. 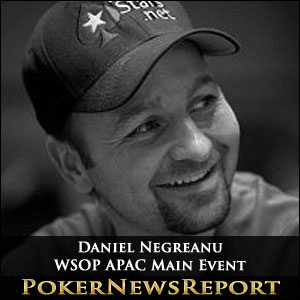 Daniel Negreanu won his fifth WSOP bracelet – and his first since 2008 – with victory in the inaugural World Series of Poker Asia Pacific Main Event at the Crown Casino in Melbourne after a commanding performance which rarely saw the PokerStars Pro in any sort of dilemma.

However, as the players took their seats at the final table, a Negreanu victory was not a foregone conclusion as he was second in chips behind 2011 EPT London winner Benny Spindler, with 2012 WSOP Octo-Niner Russell Thomas, APT Macau Main Event runner-up Winfred Yu still in the mix and four well-supported “locals” all sitting either side of him.

Negreanu off to a Flyer

Negreanu was involved in much of the early action, although few hands went to showdown. In one of the more valuable early pots, Negreanu forced George Tsatsis to fold on the river after committing almost 1 million chips, with the board showing 10♣ 9♣ Q♥ / 2♦ / 7♥ – Negreanu flashing the J♣ as he returned his cards to the dealer to indicate to Tsatsis that it could have been a good fold.

Winfred Yu managed an early double-up against Benny Spindler (A♣ K♥ > A♠ Q♠) and Spindler also became the victim of Negreanu post-flop aggression when relinquishing his hand in a 1 million chip pot at the end of the first level of play (Level 22 – blinds 10,000/20,000 – ante 3,000). Now in the chip lead, Negreanu took his stack to over 4.5 million chips when rivering a back door flush with Q♥ J♥ to send Winfred Yu back down to his starting stack.

Russell Thomas was the first player to bust in the 59th hand of the WSOP APAC climax – getting his last chips into the middle with A♠ 10♦ and failing to improve against George Tsatsis´ A♥ J♠ – but the other short-stacked players were finding the cards to change the complexion of the final table.

Kahle Burns also got involved in the action, chipping up to 1.8 million chips prior to the dinner break – catching trip Jacks in a K♣ J♣ > K♥ Q♥ hand against Daniel Negreanu, flopping top pair with A♠ 9♣ against Benny Spindler and then reducing the German´s chip stack still further with an audacious bluff on a board of 9♦ 10♦ J♠ / A♦ / Q♦ while holding just the 7♥ 6♥.

Seven became four after the dinner break as three players were quickly bust from the WSOP APAC Main Event. The first to depart the table was Mikel Habb, who shoved from the button with 10♠ 10♥ and was called by Winfred Yu (A♥ Q♥). The A♠ on the flop was all Yu needed and Habb was eliminated in seventh.

In the next hand, Benny Spindler moved all-in from the cut-off with A♦ 10♦ and was ahead of Kahle Burns´ K♦ J♠ until the K♥ was dealt on the flop – ending the German´s participation in the tournament in sixth place.

Kahle Burns lasted one more level until he was to leave the game in fifth place – shoving with Q♠ J♦ from the cut-off and being called by Daniel Negreanu on the button with A♦ K♠. The board ran 10♠ high, and the table became four-handed.

Double Ups All Around

Incredibly the double-ups just continued for Winfred Yu. Following Kahle Burns departure, Yu was once again all-in, and appearing in trouble with Q♠ 6♠ against Daniel Negreanu´s A♥ A♠, but three Spades on the board enabled Yu to double up once again – a feat he repeated several hands later when rivering a straight to take a chunk out of George Tsatsis´ stack (J♦ 10♥ > 3♣ 3♥).

Tsatsis Unlucky to Bust as Yu Uses his Nine Lives

George Tsatsis was eliminated from the WSOP APAC Main Event in the most unfortunate of circumstances. Having raised post-flop (Q♠ J♠ J♦) to 275,000 chips with J♥ 9♥, and being called by Daniel Negreanu (A♥ Q♥), Tsatsis was again the aggressor following the Turn 4♦. However, in response to Tsatsis´ 510,000 chip bet, Negreanu bet all-in. Tsatsis called and was 95.5% favourite to double up until the Q♦ was dealt on the river – giving Negreanu a better Full House.

Negreanu Does it with Ducks

Daniel Marton made his namesake work in the heads-up despite being at such a big chip disadvantage. Marton took a big pot with a pair of Eights and rivered a straight to double up to 2.5 million chips. Thereafter the players twice split pots when Marton put his tournament life on the line, and the Australian shoved once more to put Negreanu in the tank before the chip leader gave up a valuable pot.

Ultimately, it was going to be Negreanu´s day and when his 2♠ 2♥ shove was called by Marton (A♠ 7♠), there was an air of inevitability that Marton would miss his outs. The flop of 6♦ J♠ K♥ and Turn 10♥ gave Marton the further chance of a straight draw, but the 4♦ bricked on the river to give Daniel Negreanu his fifth WSOP bracelet and send him off to Berlin for the EPT Events next week more than $1 million richer.