Poker Hall of Fame nominations have raised a few eyebrows – no more so than from the twice nominated, never elected PokerStars professional Daniel Negreanu. 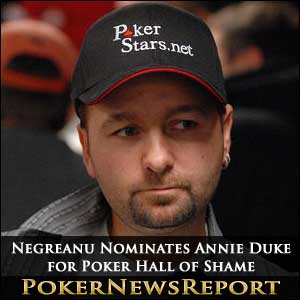 The recently announced nominations for the Poker Hall of Fame have raised a few eyebrows among the poker fraternity – no more so than from the twice nominated, never elected, self opinionated PokerStars professional Daniel Negreanu.

Daniel Negreanu – who tweeted on the release of the nominations that if he were allowed a vote it would go to Bruno Fitoussi, founder of the Aviation Club in Paris – used the announcement that Annie Duke was to be included among the nominees to launch another attack against his least favourite poker player.

“For What?” Exclaims Negreanu

Annie Duke´s nomination was based on her multi-million dollar career winnings, WSOP bracelet and WSOP Tournament of Champions title (2004). She also won the National Heads-Up Poker Championship in 2010 and has been a high profile ambassador for the Epic Poker League which, although in its infancy and suffering from plenty of negative scandals, could be regarded by some as being positive for the game. Negreanu disagrees with her selection, choosing to ignore Duke´s achievements and listing the reasons that – in his opinion – should disqualify her from consideration.

Although Negreanu´s list of Duke´s negative features may seem relatively minor in light of the Full Tilt Poker Scandal, there is a history between Negreanu and Duke which stretches back almost a decade. Negreanu recently tore into the Epic Poker League, claiming it was doomed to failure and branded Duke´s brother – Howard Lederer – “an idiot” for his part in the mismanagement of Full Tilt Poker. In Negreanu´s latest outburst he stated “If you took out the “F” and added a “Sh” in the word fame then yes, I think she should be inducted,” and then added. “Along with her brother, the Lederer family would be the king and queen of the poker Hall of Shame“.

The Hall of Fame Roll-Call

Irrespective of Negreanu´s anti-Duke rant, the EPL commissioner faces tough opposition if she wants to claim her place among the world´s most famous poker celebrities. Previous inductees into the Poker Hall of Fame include Benny Binion, Chip Reese, Phil Hellmuth, Doyle Brunson and Dan Harrington. Competition for this year´s induction into the Poker Hall of Fame will see Duke up against the likes of the “Robin Hood of Poker” Barry Greenstein, who has donated more than $7.5 million in poker tournament winnings to charity, John Juanda, who has five WSOP bracelets and is the 6th placed all-time money winner with around $12 million in career tournament earnings, and Jack McClelland – who has done a sterling job as the Tournament Director of both the World Poker Tour and World Series of Poker.