Negreanu and McClelland Welcomed into WSOP Poker Hall of Fame

Daniel Negreanu and Jack McClelland will be welcomed into the WSOP Poker Hall of Fame on Nov 9th prior to the conclusion of the WSOP Main Event Final Table. 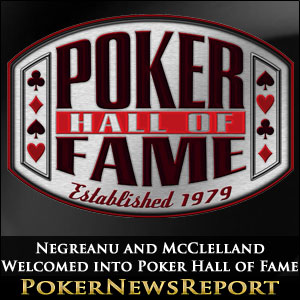 Daniel Negreanu and Jack McClelland will be welcomed into the WSOP Poker Hall of Fame on Nov 9th prior to the conclusion of the WSOP Main Event Final Table.

There were few surprises last night when Ty Stewart – governing council member for the WSOP – announced that Daniel Negreanu and Jack McClelland were to become the 47th and 48th members of the WSOP Hall of Fame.

Both individuals had been widely tipped to receive the World Series of Poker´s highest accolade from the ten nominees that were announced last month; and, announcing their selection, Stewart commented there is a common thread between these two deserving nominees – both live all-in on poker and have devoted their full hearts to the game.

How the Selections were Made

Each year the WSOP welcomes one or two individuals from the world of poker into the Poker Hall of Fame. An initial selection of nominees is compiled by a public vote, which is then reduced to a final selection of ten by the WSOP´s Nominating Committee who has the power to add or subtract nominees at it sees fit.

This year – once the final ten nominees have been determined – ballot papers were distributed to the twenty-one surviving members of the WSOP Hall of Fame and a twenty-person panel comprised of some of the most influential people in the poker media. Nominees were given a ranking of between one and ten, and the ballot papers returned to the WSOP´s Governing Council who announced the two winners.

Both players were quick to make statements expressing their gratitude to those who had voted for them to be inducted into the WSOP Poker Hall of Fame. Due to age restrictions, it was the first time that Daniel Negreanu could have been included in the nominations, and he was thrilled to have been selected for the Hall of Fame at the first time of asking:

It’s an honor to be inducted alongside so many great players that have come before me. An even bigger honor to be recognized at age 40, the same age as the legend Chip Reese. Thank you to the living members of the Poker Hall of Fame and those on the Blue Ribbon Media Panel that voted for me.

Jack McClelland has been involved in the operations side of the poker industry for more than four decades. Having worked his way up to becoming the WSOP tournament director during the early 80s – where he worked alongside existing Hall of Famers Jack Binion, Eric Drache and Bobby Baldwin – McClelland then took over the poker room at the Bellagio prior to his retirement last year. McClelland said:

Being inducted into the Class of 2014 Poker Hall of Fame is a very exciting prospect and I am sure it will be a very humbling experience,” said McClelland.  “I thank everyone involved in this process and to the WSOP, WPT and all of the great people I have met and the wonderful people I have worked with throughout the years. Thank you for bestowing this honor upon me. I am very grateful.

Induction to Take Place at Binions on Nov 9th

Daniel Negreanu and Jack McClelland will be officially welcomed to the WSOP Poker Hall of Fame on Sunday Nov 9th at Binions Gambling Hall & Hotel – the location at which Negreanu won his first WSOP bracelet in 1998 when Jack McClelland was the tournament director. The ceremony will be the kick-off for the November Nine celebrations, which will reach its climax two days later when the 2014 WSOP Main Event Champion will be crowned.