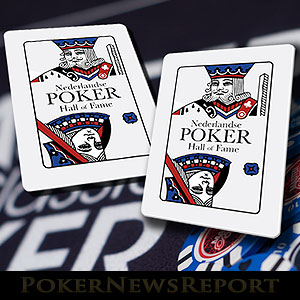 Following the uproar about the North American bias in the WSOP Poker Hall of Fame, the Dutch poker industry decided to do something about it. Representatives of the poker media and Holland Casino got together to create a Nederlandse Poker Hall of Fame and, during October, members of the public were invited to vote for their favourite poker player or personality – the only qualifying criteria being that they had to be Dutch.

After counting hundreds of votes cast for twenty-one nominees, the final three players were announced and inducted into the Nederlandse Poker Hall of Fame last Friday at a special dinner (well, drinks and snacks) prior to the beginning of the Master Classics of Poker at the Holland Casino in Amsterdam. As well as becoming the initial members of the Nederlandse Poker Hall of Fame, Marcel Luske, Noah Boeken and Jorryt van Hoof were each presented with special lithographs created by the renowned tattooist Henk Schiffmacher.

For anybody unfamiliar with the three inductees into the Nederlandse Poker Hall of Fame, here is a quick trio of bios.

Marcel Luske is known in Holland as the “Godfather of Dutch Poker”. Known for wearing his sunglasses upside down, the “Flying Dutchman” heads the all-time money list in Holland and has twice won the European Player of the Year award. Away from the poker tables, Luske was a co-founder of the International Poker Federation, has contributed to a number of TV poker shows and mentored many young Dutch poker players.

One of Luske´s protégées was Noah Boeken. Boeken has been a familiar face on the European poker circuit for more than a decade – his first recorded cash coming in the 2003 Master Classics of Poker. He was the first Dutch winner of a European Poker Tour Main Event (Copenhagen 2005) and celebrated ten years as a professional by taking down the 2013 Master Classics of Poker for €306,821 – the biggest live cash of his career. For many years, Boeken was also a sponsored pro on PokerStars.

Jorryt van Hoof came to international fame when he featured in the 2014 WSOP November Nine. However, for the previous ten years van Hoof was a recognised cash game player in the Netherlands. He also founded the first Dutch video coaching website and has been a superb ambassador for Dutch poker since his moment in the spotlight last year.

Who Else was Nominated?

Among the twenty-one nominees for the Nederlandse Poker Hall of Fame there were many familiar faces. Fatima Moreira de Melo headed a PokerStars-heavy roll-call of internationally famed players that included the likes of Lex Veldhuis and Ruben Visser. WSOP bracelet winners Rob Hollinck and Marcel Vonk were also among the nominees – but there was no place for Pieter de Korver, Govert Metaal or Michael Brummelhuis, despite their high rankings in the Dutch all-time money list.

Industry figures were also among the list of nominees. Mario La Ferrera – the marketing manager of the Holland Casino who is also responsible for the WPT Tour in the Netherlands – was considered for induction, as was Peter Voolstra – who was responsible for bringing the Master Classics of Poker to Amsterdam twenty-four years ago. Maybe – like the Europeans that were omitted from the WSOP Poker Hall of Fame – they will get their turn next year!