PokerStars has announced the dates and Main Event buy-ins for (nearly all of) the six stops on the United Kingdom & Ireland Poker Tour (UKIPT) in 2014. 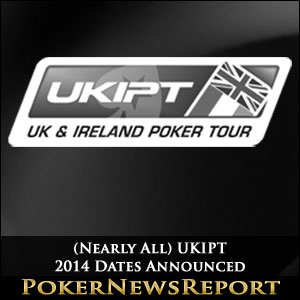 PokerStars has announced the dates and Main Event buy-ins for (nearly all of) the six stops on the United Kingdom & Ireland Poker Tour (UKIPT) in 2014.

While the focus of attention on the PokerStars client is the forthcoming PokerStars Caribbean Adventure – The Best 9 Days of Poker on the Planet – the dates for four of the six stops on the 2014 United Kingdom & Ireland Poker Tour have been (relatively) quietly announced.

The schedule for the UKIPT 2014 has been drastically reduced for Season 5 (Edinburgh was originally the final leg of Season 4, but seems to have been integrated into the new schedule), and a notable absentee from the list of Main Events is the UKIPT Galway – which, in 2013, was the first UKIPT Main Event to have an overlay.

A further overlay at the UKIPT Isle of Man in November has prompted a re-think about the two UKIPT events to be hosted in Dublin and the Isle of Man in 2014, and the cost of the buy-ins (and the guaranteed prize pool) has been reduced accordingly – potentially enabling more players to qualify online for these events.

The Assembly Rooms in Edinburgh will host the first of the 2014 UKIPT Main Events from 16th – 20th January and features a £1,100 buy-in Main Event with a £500,000 guaranteed prize pool. The UKIPT Edinburgh has always been a popular event and last year players from eight different countries contested the final table.

Ultimately, the Main Event was won by Nicolau Villa-Lobos for £101,000, after a sensational final day which saw the Brazilian complete a last-to-first final table victory and deny local favourite David Vamplew a home victory.

Dublin has not featured on the UKIPT schedule since Richard Evans completed a Lazarus-esque comeback in May 2012 to recover from having less than one big blind on Day 3 to claim the €75,500 first prize from a field of 597 players.

The venue of the Mansion House on Dawson Street – the official residence of the Lord Mayor of Dublin – has been chosen to host the UKIPT Dublin and PokerStars are guaranteeing that the €770.00 buy-in Main Event will have a prize pool of €350,000.

The Nottingham leg of the UKIPT is usually played around the end of the year – indeed, it is only four weeks ago that Ben Mayhew won an emotional climax to the UKIPT Nottingham 2013 and topped 458 players to claim a first prize of £72,840.

However, according to the UKIPT 2014 schedule, the tour will return to the Dusk till Dawn Poker Club between 7th and 12th May next year to host an incredible £1 Million guaranteed Main Event with a buy-in of £1,100.

Following the colossal success of the inaugural UKIPT Marbella in 2013, the tour will be returning to the Casino Marbella on the Costa del Sol in June with a €1,100 buy-in Main Event that will have a €500,000 guaranteed prize pool.

Last summer, Ludovic Geilich bested a field of 763 (the biggest field outside of the €1 million guaranteed UKIPT Galway) to collect €130,000 after a three-way deal at the final table and this year it is likely that the guaranteed prize pool will get shattered once again.

The two events for which the dates have not yet been confirmed are the UKIPT Isle of Man and the UKIPT London. What is known is that the guarantee for the Isle of Man Main Event has been reduced to £350,000 after a poor turn-out for the feature tournament in November 2013; while the dates and venue for the UKIPT London will probably coincide with the EPT London sometime around October 2014.

Qualifiers for the UKIPT Edinburgh Main Event, the side events and the Edinburgh Cup tournament are now running on PokerStars. You will find the satellite tournaments listed under “Events / More / UKIPT” and, if you click on the list of Day 1B direct buy-ins, you will find that Jake Cody and Vicky Coren-Mitchell have both already registered for the tournament!