Native New Yorker Hal Rotholz survived a long and brutal day to lead the Day 1A of the $2 million guaranteed Borgata Poker Open #1 in Atlantic City. 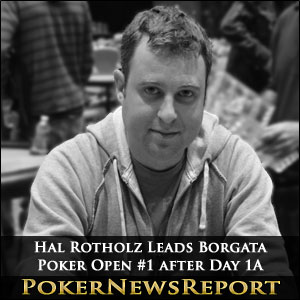 Native New Yorker Hal Rotholz survived a long and brutal day to lead the Day 1A of the $2 million guaranteed Borgata Poker Open #1 in Atlantic City.

Queues Form to Re-Enter for Day 1B

Such was the popularity of this event that queues started forming from early evening onwards to re-enter the tournament on Day 1B. Day 1A re-entries were allowed up until the end of Level 9 but, with the likelihood that most players surviving until Day 2 will cash in the event, anybody busting out during the later levels was joining the queue as quick as they could.

At one point it was taking an hour and twenty minutes to get to the cashier´s desks to re-enter, and the Borgata management took the sensible decision to open up five cashier´s windows and allow re-registration throughout the night. Advice to anybody who has not yet entered or re-entered Event #1 of the Borgata Poker Open is to get there early!

Main Event another Twelve Days Away

Last year´s Main Event winner – Ben Hamnett – collected $818,847 after outlasting a field of 1,161 players, and previous big winners of this prestigious event include Bobby “BigRedAK” Oboodi ($922,441 in 2011) and Oliver Busquet ($925,514 in 2009) – who pulled off one of the most remarkable comebacks in WPT history when recovering from a 20:1 chip deficit in the heads-up against Jeremy Brown to record his largest ever live tournament cash.