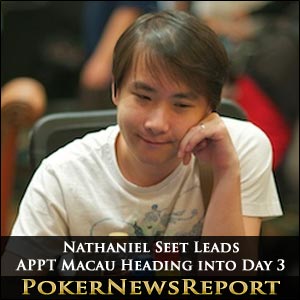 Seet, who holds about five times the average stack heading into Day 3, is followed by South Korea’s Danny Park in a distant second place on 478,100 chips.

Although not well known, Seet does have some form on the APPT, having recorded an eighth place finish at the 2008 Auckland main event, a victory in the Manilla High Roller event – also three years ago – as well as a 10th place in the Cebu main event last year.

Seet took down a massive pot midway through Day 2 to stride to the top of the leaderboard.

With more than 60,000 chips already in the pot and with the flop showing K♦ 2♠ 3♣, big blind Andrei Taranu, who had a big stack, was first to act and decided to go all-in in an effort to steal.

However, Seet surprised the Romanian by making the call to show K♥ K♠ to have trip kings.

Of course, Seet must have thought he was favourite to win the pot, but also had to be more than a little surprised to see Taranu reveal 5♦ 4♦. Yes, Taranu had an open-ended straight draw, but to stake your tournament life on such a hope seems strange.

Either way, the 10h arrived on the turn to change nothing, with the 2♣ on the river sending Taranu out against Seet’s full house.

Seet moved on to about 225,000 chips with that hand and continued to add chips throughout the rest of the day to secure his commanding lead at the close of play.

But it wasn’t such a good day for eight-time World Series of Poker (WSOP) winner Phil Ivey as the American hit the rail early then might be expected.

The American star – back after a seven-month absence from the poker scene – was eliminated not long before close on the second day when the short-stacked Darren Judges three-bet when holding A♦ J♣.

China’s Sha Jun, who had ended Day 1b as chip leader on 169,400 and second overall, did not have a good day either, being eliminated early, while Team PokerStars Pro Bryan Huang, of Singapore, who had started the day in fourth place, also hit the rail.

Meanwhile, Chinese Taipei’s Shih Chieh Su – who topped the leaderboard after the two opening days on 171,800 – only marginally increased his stack to 179,300 to drop back down to 39th place.