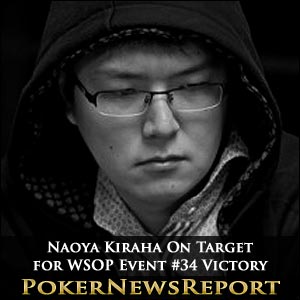 Japanese player Naoya Kiraha is in a great position to take down the $5,000 buy-in Pot-Limit Omaha Six-Handed event #34 at the World Series of Poker in Las Vegas.

Ten levels were played out on Day 2, with runaway chip leader Kiraha enjoying a fantastic day when busting numerous players with massive hands that held or draws that were completed. Incredibly, when just two-dozen players remained, Kihara –with about 25% of the chips – held more than most will take into today’s six-handed final table.

2011 Runner-Up Hans Winzeler Back For More

Interestingly, last year’s runner-up, Hans Winzeler, will also return today to battle it out for the $512,029 top prize. The Miami player – who lost out to Jason Mercier last summer in this same event to collect $383,075 – will be aiming to go one better by improving on his fourth place start.

Today will see four players eliminated before being redrawn to make up a single table. Then, when one more player is eliminated, we will have our six-handed final table.