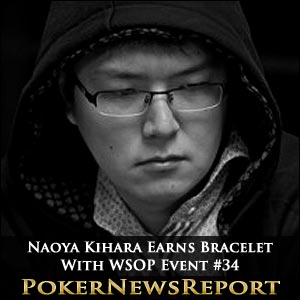 It took three action-packed days for the Tokyo native to bag his nation’s first gold bracelet, but the start-of-day chip leader displayed great skill and aggressiveness to secure the title by defeating American Chris De Maci in their heads-up battle at the Rio All-Suite Hotel & Casino.

A total of 419 players started this event – creating a prize pool of $1,969,300 – but it seemed Kihara was destined to win the bracelet from about halfway through Day 2 as he eliminated several big-name pros on what was surely among the hottest streaks ever seen at the WSOP.

With Kihara knocking out American Daniel Hindin in third place, the Japanese player held 4,575,000 chips to De Maci’s 1,715,000 – and the former was never really troubled as he charged to glory in 45 minutes of heads-up play that left the runner-up with $316,308 as a consolation.

The final hand of the tournament saw Kihara, on the button, raise and big blind De Maci call. The flop came 2♥ A♠ J♥ and De Maci check-raised to 550,000 after Kihara had made a 160,000 continuation bet. Kihara then shoved and De Maci called for his last 450,000 chips. Kihara showed K♥ J♠ 6♣ Q♥ for a pair of jacks, while De Maci revealed 5♣ 4♠ 3♣ 2♠ for bottom pair and a straight wrap. However, the 6♦ turn and 7♣ river were no help to the American and Kihara – with two pair – was announced as the latest champion.

Poor Kevin MacPhee had a bad day all round, crashing his vehicle in the Rio’s car park before then also crashing out of the tournament in 11th place for $26,349. The Idaho pro was already late when he joined the action as the short stack, but was soon leaving after Joseph Cheong displayed no sympathy by eliminating him from the tournament within the first quarter-of-an-hour.

Hindin was the man who provided Cheong with his first double-up on the first hand of the day that left the Connecticut player with just 86,000 chips. However, Hindin – through intelligent play and persistence – bounced back into contention by increasing his stack to 740,000 just before the end of level 20, partly due to his elimination of Bulgarian Dimitar Danchev in 10th place for $34,620.

Dimitar Danchev Out in 10th

Cheong was the next to hit the rail in ninth place for $34,620 – not long after doubling-up through MacPhee. Big blind Cheong and small blind Davidi Kitai had all the chips in the middle as the action folded before them to see a board of 8♠ 9♦ A♥ 5♦ 7♦.

Cheong had shown A♠ A♠ 2♠ 6♠ for trip aces, but lost out to Belgian Kitai’s Q♦ 4♦ 7♣ 5♣ when those runner-runner diamonds on the board gave him the winning flush.

The elimination of Georgia’s Jason Dewitt in eighth place for $46,692 by Hans Winzeler prompted the movement of the final seven players to a new table for a redraw.

Scott Bohlman, of Illinois, was the next to go about 75 minutes later when he exited in seventh place for $46,692 – thus creating the official six-handed final table.

Winzeler – who picked up $383,075 when runner-up in this event last year to Jason Mercier – was the man to knock out Bohlman and so confirm his final table place in this tournament for a second successive summer.

Bohlman raised to 70,000 to only be called by Winzeler for the 10♠ 9♥ 8♥ flop. Winzeler check-bet the pot after Bohlman had already bet the pot, ensuring that the latter shoved all-in. Winzeler made the call to show 6♥ 9♥ J♠ 7♠ for a flopped straight, as well as a redraw to a hearts flush.

De Maci showed K♠ 2♠ 4♣ 5♥ for top and bottom pair while Le tabled A♦ 9♦ Q♣ J♣ for a flush draw and an inside straight draw. The Q♥ turn changed little but the 2♥ river gave De Maci a full house and the elimination.

Kitai, of Brussels, hit the rail in fifth place for $92,064, so disappointing the many people who considered him favourite for the title.

The 7♥ turn gave both the same straight, although Kihara was also on for a better straight – and that’s exactly what happened when the 10c arrived in the river.

Winzeler again came close without bagging his first bracelet when exiting in fourth this time for $134,857.

Daniel Hindin Knocked Out in Third

However, Kihara tabled the A♦ 4♠ 5♠ 7♣ for a pair of aces that stayed in front when the 8♠ arrived on the turn and the Q♦ landed on the river.

It was all down to Kihara and De Maci for the title now – and that heads-up clash was quickly ended by the Japanese player.