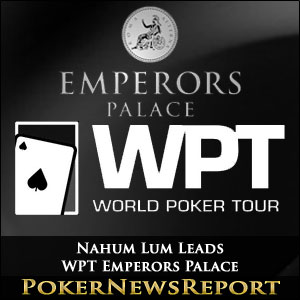 The WPT Emperors Palace Poker Classic got underway yesterday at the Palace of Dreams Casino in Johannesburg and, after six 60-minute levels, local player Nahum Lum headed the fifty-four survivors who will carry forward their chip stacks into Saturday´s Day 2.

Lum was one of four players to improve their 30,000 chip starting stack to more than 100,000 chips by the end of the night, courtesy of some “adventurous” betting actions from his opponents.

By the end of Level 2 Lum had already taken a commanding chip lead after hitting Quad Jacks to bust a player who had moved all-in with pocket Tens, and then eliminating a second player who shoved with Jack-Nine on a flop of Q-9-2 when Lum had been dealt Ace-Queen.

The hand that pushed him beyond the 100,000 chip mark came a little later in the day when, on a flop of J♦ 9♥ 6♠, Lum´s opponent committed the last of his chips with Q♥ 9♦. Lum made the call with K♥ J♣, and his top pair held to dispatch another player to the rail.

Another two top female players also made an impact on Day 1A of the WPT Emperors Palace Poker Classic in Johannesburg – Gaelle Baumann and Ana Marquez. Baumann was on Nahum Lum´s coattails for most of the day after flopping a straight against Robbie Sham to double up in the first level of the day and then flopping two pairs with A♦ 3♦ to take a 15,000 chip pot from Werner Smit.

Ana Marquez had a much more subdued day, but finished the night with 54,450 chips after forcing Rudolf Fourie off of a board of 5♦ 3♣ 2♣ / 3♥ / 6♦ in a hand in which Fourie claimed he had an overpair. The roll-call of female players was completed by Jennifer “Jennicide” Leigh, who finished the day with slightly less than her starting stack.

Looking Ahead to Day 1B and Beyond

The entry list of eight-five is eleven more than the WPT Emperors Palace Poker Classic had attracted at this stage of the tournament last year, and players who bust out on Day 1A have the option of unlimited re-entries into the $3,600 buy-in event on Day 1B or before play gets underway on Day 2.

Those who can enjoy a day off in the sun (currently 28ºC/82ºF) before returning to the table on Saturday include: