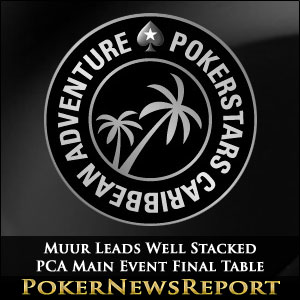 It took less than three full levels of play to reduce the twenty players who returned for Day 5 of the PCA Main Event to a final table of eight – during which time there were plenty of brave calls, hard luck stories and failed gambles.

Leading the final table when play resumes at the Atlantis Resort in the Bahamas this afternoon will be the player who entered the penultimate day of the tournament with the chip lead – Estonian poker player Madis Muur – who is closely followed by Mike “Timex” McDonald and Day 2 chip leader Pascal Lefrancois.

Muur Gets Lucky to Set Up Good Day

Madis Muur had entered Day 5 of the PCA Main Event with the chip lead courtesy of victory a 1.8 million chip pot against Roger Teska on Saturday, but it looked as though Muur was going to hand some of those chips back, when he shoved from the big blind with 6♦ 6♣ and Teska made the call with 8♠ 8♣.

The flop of 3♠ 4♣ 5♠ gave Muur an open-ended straight draw which spiked on the River (2♠) to send Roger Teska to the rail in twentieth place, while Madis Muur used his fortunately enhanced chip stack to act as a springboard for the rest of the day.

Muur moved further into the chip lead when he extracted three streets of value with Q♥ Q♦ in a hand against Daniel Gamez, and completed the day with 6,205,000 chips after knocking out Tom Hall in tenth place – A♦ 8♠ > K♠ 9♥.

Despite being played on a tropical island far, far away, the PokerStars Caribbean Adventure forms part of the European Poker Tour (EPT) ; and should Mike “Timex” McDonald prevail in the 2014 PCA Main Event, he will become the first player ever to win two EPT Main Events (McDonald won the Dortmund Main Event in Season 4).

McDonald´s cause was helped by busting Pal Zsibrita in fourteenth place K♠ J♥ > K♣ Q♥ when McDonald flopped two pairs; and by coming out on top in an ongoing battle against Shyam Srinivasan, which saw McDonald and Srinivasan exchange chips multiple times throughout the three levels of action.

Lefrancois Has Golden Chance Thanks to Silver Stupidity

Max Silver has developed a reputation for getting into a good position – and then blowing it! Yesterday was no exception, as he was up into third place with more than 3 million chips after eliminating Adrian Bussman from the PCA Main Event in seventeenth place (J♦ 10♦ > 5♥ 5♦), before giving Isaac Baron three streets of value for (Baron´s) flopped two pairs and then unsuccessfully chasing a open-ended straight draw against Dominik Panka.

By comparison, Pascal Lefrancois´ chip stack was heading in the other direction. Lefrancois bust Antoine Saout in sixteenth place K♦ K♣ > A♣ K♠ and Grayson Ramage in eleventh place J♥ 9♥ > 10♣ 10♠ – before a first clash between Lefrancois and Silver had resulted in the Canadian forcing the former UKIPT champion out of a 280,000 chip pot and reducing Silver to less than 1 million chips.

When the two players were to clash again, it signalled the end of Max Silver´s participation in the PCA Main Event and the conclusion of the day´s play.

Silver (A♦ 4♦) announced he was all-in for his last 600,000 chips and got a call from Lefrancois (K♦ 10♥), while Baron folded. The K♣ on the River was not the diamond that Silver had gambled his tournament life on, and he was bust from the PCA Main Event in ninth to set this afternoon´s final table.

Looking Ahead to the PCA Main Event Final Table

When play resumes this afternoon at the Imperial Ballroom in the Atlantis Resort, the eight remaining players will have around twenty minutes to play in Level 26 (blinds 20,000/40,000 – ante 5,000). None of the players are at immediate risk, with the shortest stack player sitting quite comfortably with thirty-seven Big Blinds.

The next player to depart the PCA Main Event will receive $173,220, while to top two players are assured of a seven-figure payday – with the winner collecting $1,820,420 assuming that no final table deals are negotiated. You can find out who that winner is by following @PokerNewsReport on Twitter.