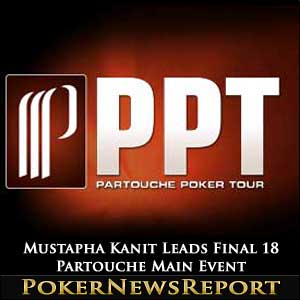 The winner of the IPT Nova Gorica 2, mini-IPT Portomaso and a €1,000 side event at the EPT Madrid took an early lead and was the first player to cross the 1 million chip threshold.

However the hand which made a significant difference to Kanit´s fortunes came late in the day when his flopped set of Kings bust Guiseppe Pantaleo´s flopped set of Eights and he took his chip stack to almost 2.4 million chips.

The Pack Well Spread Out

Alexandre Coussy was the only other player to crack the 2 million chip mark on a day which saw a lot of small and medium pots exchanged, but not the great number of eliminations that were seen on previous days.

Throughout the four levels that were played on Day 4, only 29 players departed – including overnight chip leader Juan Maceiras – and the player responsible for much of the damage was Ukrainian Oleksii Kovalchuk. Kovalchuk, who built up a commanding lead on Day 2, only to be short-stacked by the end of Day 3, recovered well on Friday to rejuvenate his stack to 1,608,000 chips and currently sits in fourth place.

The two British poker players that had taken their seats at the beginning of the day – Sam Trickett and Ben Vinson – safely negotiated their way into the final eighteen, although both will face a tough task when play starts on Saturday. Trickett is in thirteenth with 512,000 chips and is drawn on the same table as Mustapha Kanit.

Vinson is last of the eighteen players with 232,000 chips (blinds 6,000/12,000) and will have to face both Alexandre Coussy and Oleksii Kovalchuk (recent WPT Legends of Poker Tour winner Will Failla just happens to be on this table too!).

Last Day in Cannes – For Now

Today (Saturday), the Partouche Poker Tour Main Event will play down to a final table of nine who will return at the end of November to determine the outcome of the €1 million first prize. The current standings for all 18 remaining players are as follow:-

UK poker players tasted early success in the €5K heads-Up side event. Jake Cody, Matt Perrins, Andrew Feldman and James Bord are all through to round three of the event (the final 16) with at least one Englishman guaranteed to progress to the quarter-finals as Perrins and Feldman have been drawn against each other. Other top players still in contention include Sorel Mizzi (who beat Phil Hellmuth in round 2) November Niner Matt Giannetti and Dan “Jungleman” Cates.