Must Do Better at the EPT Barcelona

Despite the EPT Barcelona being hailed as a great success, some people will never be happy- blaming anything from soft pillows to ginger hair for their demise. 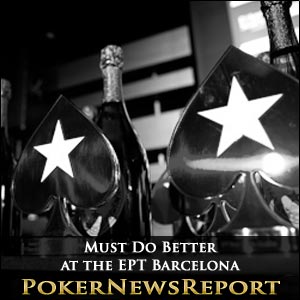 Despite the EPT Barcelona being hailed as a great success, some people will never be happy- blaming anything from soft pillows to ginger hair for their demise.

Excluding the PokerStars Caribbean Adventure and European Poker Tour Grand Finals, this year´s Barcelona EPT Main Event has been confirmed as the biggest since Liv Boeree captured the €1.25 million first prize in San Remo in 2010. More than a thousand players either qualified through online satellites or ponied up the €5,300 buy-in for the event – creating a prize pool of €5,247,700 and assuring that on Saturday, somebody will collecting a cheque in excess of €1,000,000!

The decision by PokerStars to synchronise their regional tournament finales (in this case the Estrellas Poker Tour) with the European Poker Tour schedule seems to have paid off – with many of the side events being fully subscribed and, understandably, a few grumblings about the length of time it is taking register the number of people who wish to participate in the events. However, some of the complaints have been a little more outrageous.

Daniel Negreanu, having already blown €100K on two entries into the Super High Roller while suffering from an overdose of Sudafed, has complained about the heat from the lights when playing on the feature table, the price of carrots in Barcelona and the softness of his pillow. Suppose that is what you get for being a rich superstar vegan who can afford to stay in posh hotels. At least he is still in the event –

Justin Bonomo also complained about the heat (in Spain in August) – blaming it for breaking his focus and busting out – while Betrand “ElKy” Grospelier came dressed for the heat in a kimono, but raised the temperature even more when his pocket Aces were cracked by an opponent´s set of Eights – telling a TV production engineer “where to go” and tweeting #whenwillitallend.

At least the British poker players were a little more honest about their opening days. JP Kelly admitted that if he had been playing his best A+ game he would have made it through the day, Rupert Elder simply said “could have folded, but didn´t” while Chris Moorman tweeted #NoExcuses after getting all-in with QJ v A7 on a board of T93. Of those Brits that survived the heat, John Eames messaged that he was still excited to be involved at the beginning on Day 2 while Barny Boatman issued humble apologies after complaining that he could not find his name on the seating draw – and then realised he was looking on the wrong year!

Last word on Day 1 events at the EPT Barcelona has to go to Praz Bansi – winner of two WSOP Bracelets – who tweeted after his demise “busted the main event in barca,played good but wasn’t working,am fully convinced players with ginger hair are luckier,gona prove it somehow”.  There is no truth in the rumour that ginger wigs are now on sale outside the Arts Hotel in Barcelona.

Day 2 of the EPT Barcelona Main Event is already underway and apparently the air-conditioning is working better today than during Sunday and Monday. Let´s hope that, for those who have not been doing so well at the EPT Barcelona, their day gets better!