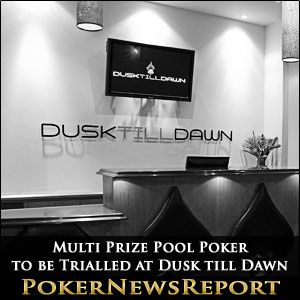 A new concept in poker tournaments is to be trialled at Nottingham´s Dusk till Dawn Poker Club, in which one tournament will have three different prize pools.

The Multi Prize Pool Poker Tournament (MPPTM) format was first conceived by UK poker player Roberto Romanello some years ago when he was a sponsored pro at Full Tilt Poker and the idea progressed so far that software developers at FTP were working on a version of the tournament format in the days before Full Tilt Poker had their operating licence suspended by the Alderney Gambling Control Commission in June 2011.

Fast forward eighteen months and Multi Prize Pool Poker (MPPTM) is set to make its debut on Thursday 10th January 2013; not in the virtual world of online poker as Romanello first believed it would, but at the innovative Dusk till Dawn Poker Club in Nottingham.

A multi prize pool poker tournament (MPPTM) works by players buying into a tournament at a level which best suits their bankroll – at the Dusk till Dawn event, these three levels are £25.00, £50.00 and £100.00.

There are several advantages of this format over “traditional” poker tournaments being suggested by Dusk till Dawn.

The first ever MPPTM tournament starts at 7.00pm at the Dusk till Dawn club on Thursday 13th January with late registration available until 8.15pm. Players will have 10,000 starting chips and there will be a 30 minute clock (so expect a late finish). As mentioned above, the inaugural multi prize pool poker tournament is going to be guaranteed for £5,000. The guarantee will be divided pro rata between the three prize pools depending on the number of players who enter each pool.

Should this first endeavour into multi prize pool poker tournaments be successful, Dusk till Dawn say that they will run an MPPTM event every Thursday evening and possibly extend it into other events hosted at the club. There could also be the possibility that the multi entry system is extended to five levels for future events or that it is applied to the club´s £100,000 guaranteed deepstack tournament which could result in a £250,000 prize pool.

Whatever the future may hold for multi prize pool poker tournaments, we wish Dusk till Dawn the best of luck with this innovative venture and, of course, everybody who takes part in it!