Mukul Pahuja – the runaway leader of the WPT Player of the Year – is also threatening to run away with the $5 million WPT Seminole Hard Rock Poker Showdown. 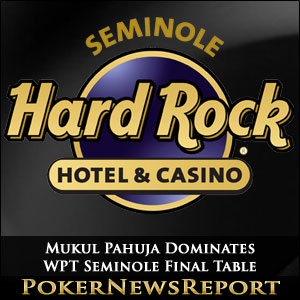 Mukul Pahuja – the runaway leader of the WPT Player of the Year – is also threatening to run away with the $5 million WPT Seminole Hard Rock Poker Showdown.

The penultimate day of the WPT Seminole Showdown was astonishing in terms of how one runaway leader was replaced by another. The day had started with Jake Bazeley holding a substantial chip advantage over the rest of the field; and, although he still remains in contention for the $1,081,184 first prize, he has a mountain to climb if he wants to overcome Mukul Pahuja.

Mukul Pahuja has enjoyed an incredible season on the World Poker Tour – with final table appearances in Montreal and San Jose, and five-figure cashes in the Lucky Hearts Poker Open and LA Poker Classic. Practically assured of the WPT POY title, Mukul Pahuja will collect his first seven-figure live poker score if he continues to carry on dominating the WPT Seminole Showdown as he did yesterday.

Bazeley Comes Out All Guns Blazing

Day 4 of the WPT Seminole Hard Rock Poker Showdown with Jake Bazeley continuing as he had finished Day 3 – eliminating Frank Russo in seventeenth place A♦ K♦ > K♥ K♠ and Rajeev Nasta in sixteenth place A♣ A♥ > 7♥ 7♦, after Eric Afriat had started the bust-out ball rolling by sending Elliott Zaydman to the rail in eighteenth place A♦ 10♦ > A♠ 7♠.

The player who was closest to Jake Bazeley in the overnight chip counts – Chance Kornuth – also got in on the act when eliminating Jordan Scott in sixteenth place K♦ K♣ > 7♦ 7♣, but Bazeley continued blazing, and took his chip stack at one point to over 13 million chips (average 4.15 million) when busting out Chris O´Rourke in fourteenth place A♦ J♣ > A♠ 7♥ and Orun Unger in twelfth A♥ 9♦ > A♣ 2♠.

Shift in Dynamics as Players Group Around One Table

The two eliminations not mentioned above were Michael Garraway´s eleventh place finish (A♥ Q♣ < James Mackey´s A♥ K♠) and Justin Young´s thirteenth place finish (Q♦ J♦ < Barry Hutter´s rivered flush with 10♣ 9♦). However, what was significant about Justin Young´s departure was that in the preceding hand he had been crippled by Mukul Pahuja Q♥ Q♣ > A♥ K♠, enabling Pahuja to take more than 5 million chips to the 10-handed unofficial final table.

The size of the chip stack was significant as Mukul Pahuja had the three shortest-stacked players to his left (Blake Purvis, Matt Glantz and Jeff Gross), and even though Blake Purvis was able to double up through Barry Hutter 2♣ 2♥ > K♠ 10♣, Pahuja was able to steal multiple blinds to chip up beyond 9 million chips by the start of Level 31 (blinds now 50,000/100,000 – ante 15,000).

Jeff Gross was the first player to depart the final table, running his 2♣ 2♥ into Jake Bazeley´s A♠ J♥ – which spiked the A♥ on the River – but from that point onwards, Jake Bazeley´s chip stack deteriorated. Matt Glantz doubled-up against Bazeley K♣ K♦ > J♣ J♠ after both players had flopped a set, but Glantz was bust in ninth place when his Q♥ J♠ failed to connect with the board and best Chance Kornuth´s 9♥ 9♠.

Bazeley´s chip stack took a further knock when Mukul Pahuja (K♣ J♦) took down a 9.6 million pot with a turned Ace-high straight, and Matt Stout temporarily took second place in the WPT Seminole Showdown when busting Barry Hutter in eighth place K♦ K♥ > 6♥ 6♠. Prior to the final table being set, James Mackey (A♣ Q♣) flopped an Ace-high flush to double up against Matt Stout (J♣ J♦) and Mukul Pahuja took another 3 million chip pot form Jake Bazeley to extend his lead further. Blake Purvis was the final player to leave the final table on Day 4 – moving all-in with A♠ J♠, and failing to improve past Eric Afriat´s pocket Nines to be eliminated in seventh place.

Looking Ahead to the Official Final Table

Should Mukul Pahuja achieve his first seven-figure live poker cash, he will have wrapped up the WPT Player of the Year title before next week´s WPT World Championship – the first time the title has been won prior to the concluding event in the WPT´s eleven-year history.