One of the largest Bad Beat Jackpots in online poker history will resume today at MPN after nearly a two-week hiatus and a massive restructuring of the rules. 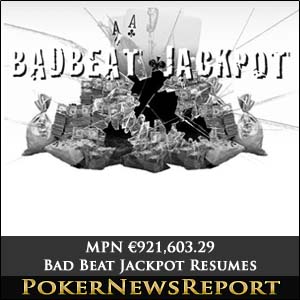 One of the largest Bad Beat Jackpots in online poker history will resume today at MPN after nearly a two-week hiatus and a massive restructuring of the rules.

The jackpot was suspended at MPN, formerly known as the Microgaming Network, on March 6 at €921,603.29. MPN has since revamped the jackpot regulations, allowing the jackpot to be won more frequently and the payouts to be spread out to more players.

The first rule change reduces the qualifying hand from quad 8’s or better to any four of a kind, provided that both hole cards are used by the hand’s winner and loser. The second change calls for players at all cash game tables beginning at €0.10/€0.20c and higher to be eligible to hit the jackpot. Players will have the option of opting in or choosing not to participate. Opted in players will contribute €0.02 from each hand to the jackpot.

In other words, €0.50 will no longer be raked from each pot of a Bad Beat Jackpot table as was done previously. There will be no segregation of BBJ and non-BBJ tables, as players at all tables can participate simply by choosing to opt in.

MPN has also done away with the 10% administration fee taken from the jackpot’s payout. Therefore, 100% of jackpot proceeds will land in player accounts. The breakdown is as follows: 40% goes to the loser of the hand; 20% to the hand’s winner; 10% will be distributed to players who have opted in and are seated at the jackpot table; 10% will go to MPN players competing at tables with identical stakes as the BBJ table; and 20% will be used to seed the next Bad Beat Jackpot.

Should non-opted in players be involved in the jackpot, players who are opted in at the same table and stakes will still collect their share of prize money. But the shares of non-opted in winners and losers of hands will be used to seed the next BBJ.

Bad Beat Jackpots were somewhat popular when the concept was first introduced several years ago. But the popularity has dwindled to the point where only three online poker networks offer the promotion today — the Winning Poker Network, Boss Media and MPN. Both the Merge Gaming Network and PartyPoker discontinued BBJ tables last year.

One obvious problem was the reduction of player liquidity due to the segregation of tables between BBJ and non-BBJ players. MPN’s unique approach aims to avoid that dilemma with its opt in system that allows players to make the choice of contributing €0.02 per hand without having to surrender €0.50 of every winning pot.