Morteza Islam took out 1,563 other poker players to secure the €50 plus €10 Dusk Till Dawn Grand Prix Texas hold’em tournament at Nottingham’s Dusk Till Dawn club. 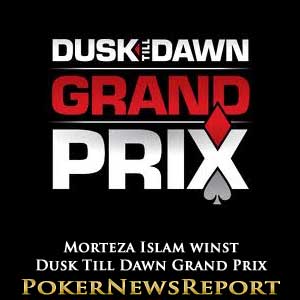 Morteza Islam has bested 1,563 other poker players to secure the €50 plus €10 Grand Prix Texas hold’em tournament at Nottingham’s Dusk Till Dawn club.

In what was the biggest every entry for a UK poker tournament, Coventry’s Morteza left with a handy little earner of €12,000, as did heads-up rival Anthony Fox after he and Islam agreed to a chop with third place finisher Gary North.

As North, however, did not make the final two, he was left with a rather nice consolation prize of €10,000.

With the lead changing hands many times when the duo went heads-up, they agreed to yet another chop to secure €12,000 each, although they did continue to play for the title.

Incredibly, just moments after reaching that agreement, it was over a mere single hand later with Morteza taking the title.

Eighth place finisher Kelvin Mullis deserves a mention, as well, having turned his €6 satellite entry fee into a £5,000 bonus prize, as well as €1,370 for his finish, after qualifying for the event through online poker site DTDPoker.com. That is an incredible return on investment which shows that online poker can pay off.

However, that record-setting UK entry of 1,564 is unlikely to last for any great length of time as Dusk Till Dawn Poker organisers are aiming to demolish it by hitting the 5,000 mark for their next Grand Prix tournament.

The organisers are poised to announce a €50 buy-in tournament for August that will feature 10 opening days and re-entries, as well as an impressive €250,000 guaranteed prize pool.