Morten Klein recovered from being one of the shorter-stack players returning for Day 2 of the EPT Super High Rollers to be the chip leader at the final table. 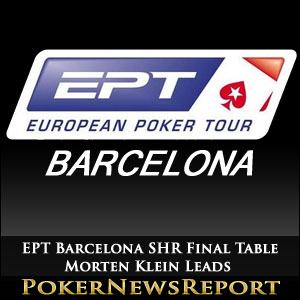 Morten Klein recovered from being one of the shorter-stack players returning for Day 2 of the EPT Super High Rollers to be the chip leader at the final table.

It was a long day at the Casino Barcelona for the Super High Rollers, as the fun and frolics of Day 1 evolved into the more serious action for Day 2. Four new players and two re-entries swelled the returning field to 54 – making a total of 77 entries and creating a prize pool of €3,697,155.

One player who treated the proceedings with possibly less respect than was due was Norwegian player Morten Klein. Klein has a reputation for brightening up the tables (and drinking plenty of beer), and he laughed and joked his way through the early levels of action to release some of the tension, and was rewarded with a triple-up to get back into contention with pocket Aces.

Having got into contention with pocket Aces, it was somewhat ironic that the hand which accelerated Morten Klein´s rise towards the top of the chip counts involved cracking another player´s Aces – those of Scott Seiver. Klein had min-raised from the button with 8♦ 6♥, and Scott Seiver in the small blind had flat called with A♠ A♣.

Sam Trickett folded in the big blind and the two players saw the flop of K♦ 6♦ 6♠ (giving Klein trip Sixes). Both players checked the flop, and then Seiver led out for 130,000 chips after the 3♠ on the Turn and another 275,000 after the 7♦ on the River. Klein flat-called both of Seiver´s bets and collected a very handy 990,000 chips when the hands were revealed.

… Then Rivers Flush to Move into Lead

Mustapha Kanit had been the chip leader for most of Day 2 of the EPT Barcelona Super High Rollers, but he lost his position at the top of the chip counts to Morten Klein just as the eleven player bubble was approaching. Kanit had been the aggressor following the flop of 7♥ 4♦ 9♠, but the roles were reversed when the J♠ was dealt on the Turn and Klein made a 225,000 chip bet, which Kanit raised to 550,000.

Klein called and, after the 7♠, led out for another 125,000 chips. With three spades on the board, Mustapha Kanit went into the tank while Morten sipped on his beer. Kanit eventually gave up the hand and threw his cards into the muck, while Klein revealed A♠ Q♠ for a backdoor flush and picked up the 1.4 million chip pot.

Tony Gregg has a fine record in High Roller events, having come second in the EPT Monte Carlo High Rollers event and won the WSOP One Drop High Roller in 2013; however he was to crash out of the EPT Barcelona Super High Rollers one place short of the money when running his K♣ Q♦ into the pocket Tens of Sven Reichardt. Reichardt improved to set of Tens on the flop and although Gregg spiked the Q♥ on the River, he left the event penniless.

Two further eliminations occurred before play was halted for the night – Day 1 chip leader Ryan Fee bust in eleventh place when moving all-in with Q♠ 10♦ (for a flopped pair of Tens) and failing to improve past Vladimir Troyanovsky´s A♠ A♦, and Jake Schindler lost a race with A♥ J♠ against Scott Seiver´s 7♥ 7♠ to finish the EPT Barcelona Super High Rollers in tenth place.