In contrast to the fireworks in the Montesino Casino over the past couple of days, Day 2 of the World Poker Tour Vienna Main Event was a relatively subdued affair. 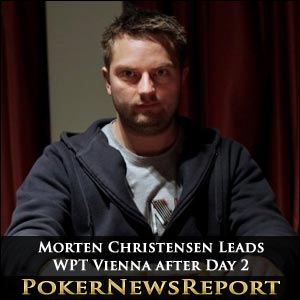 In contrast to the fireworks that have exploded in the Montesino Casino over the past couple of days, Day 2 of the World Poker Tour Vienna Main Event was a relatively subdued affair.

Denmark´s Morten Christensen quietly eased his way to the head of the leaderboard and Chris Moorman – who lies in second – responded to the question “Tell us about your big pots Chris”, with “ I haven´t had any”.

At least overnight chip leader Darko Stojanovic kept everyone on their toes, starting Day 2 in the same way as he concluded Day 1B and using his massive chip advantage to threaten the stacks of those seated him around him. It was a bold move from the French poker player as he was seated with such poker luminaries as Anton Wigg, Fabrice Soulier and Bertrand “ElkY” Grospellier.

Soulier and Grospellier Bust Out Early

But Stojanovic was not done with. Steve O´Dwyer – who has been enjoying a sensational year and knows a thing or two about live poker flips – got all-in against Stojanovic with K♣ K♦ after a flop of 5x 3x 2x, turn of 7x and river of 4x. Stojanovic rolled over Ax 6x for a rivered straight to bounce right back up the leaderboard and lay in fourth place overnight.

Inasmuch as O´Dwyer´s departure was unfortunate, spare a thought for Casey Kastle. Kastle got all-in with 7♣ 7♠ on a flop of J♠ 8♥ 2♣ against Peter Galla´s A♠ Q♠ and was still favourite when the K♥ was dealt on the turn. Unfortunately for Kastle, the 10♠ on the river gave Galla a runner-runner straight and knocked the popular Slovenian down to just 30 big blinds. However, justice was served with Galla´s later elimination and Kastle surviving the day to finish with a chip stack of 96,500.

That, however, was not the hand of the day – this one was:-

Wilinofsky made the call and Natale – the aggressor in most of the action – peeled over A♥ A♣ for a full house. However, Wilinofsky was sitting on 4♣ 4♠ for flopped quad 4´s and took a massive pot while eliminating one of the most dangerous players in the game.

If Day 2 of the WPT Vienna Main Event was a subdued affair, expect Day 3 to be little different – during the early levels at least. With just 67 players remaining from the original entry of 396 – and only 45 players due to get paid – players with less than the average chip stack of 177,313 will be guarding their chips carefully (or at least should be!) as the blinds start at 1,500/3,000 (ante 500).

Those with one eye on the eliminations board will include Marvin Rettenmaier (73,500 chips), Andy Frankenberger (115,500) and Eugene Katchalov (133,500), while those who might have enjoyed a better night´s sleep last night include:-