Kim outlasted 363 opponents to secure his first WPT crown by taking down the Bay 101 Shooting Star main event for an impressive $960,000, his biggest ever pay day. 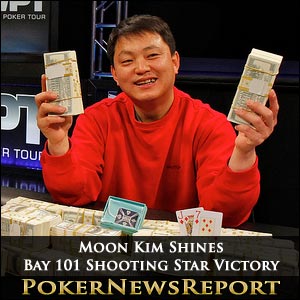 Kim, from Dublin in California, also picked up a seat worth $25,000 for the season-ending WPT Championship in May, as well as a WPT Champions trophy, after defeating Ubaid Habib in their heads-up battle that left the runner-up with $570,200 from the $3,458,000 prize pool.

The eventual champion started Day 4 with a medium chip stack, but fought hard to outlast players such as Joe Serock and Erik Cajelais at the six-handed final table to emerge victorious from his head-to-head with Habib.

Champion Starts Heads-Up Ahead on Chips

That certainly gave Habib a lot to think about, but – after about two minutes – he called for the last 2,800,000 chips to reveal Q♣ 9♥ for a pair of nines, while Kim showed J♦ 7♦ to be searching for a diamond flush.

The A♣ turn kept Habib in front, but the 8♦ river did give Kim his jack-high flush and the title.

While Habib will be disappointed not to have won the $10,000 buy-in event, he also pocketed his largest prize – easily surpassing the $5,094 he collected when also finishing runner-up, along with team-mate Jorge Pineda, in the $500 buy-in No-Limit Hold’em Partners event at the 2009 Gold Rush tournament in San Francisco.

The first exit of the day arrived after 113 hands – and the unfortunate player was Illinois’ Joseph Elpayaa, who picked up $128,200 for finishing in sixth place.

The turn of 3♣ and 9♦ river changed nothing and Elpayaa was off to collect his prize for finishing in sixth.

Kim turned over 4♦ 4♥ to be ahead as the flop came A♠ 5♠ 2♠ to give Badecker top pair. However, the 3♥ on the turn provided Kim with a five-high straight to secure the elimination. The unimportant 8♦ on the river completed the board.

Kim showed A-8 for an ace high, while Quebec’s Cajelais flashed an ace before chucking his cards – obviously conceding defeat – and Habib showed Q-9 to take down the pot with two pair, kings and queens.

Joe Serock Out in Third Spot

A total of 47 Shooting Stars started the tournament, with the last to fall being French-Canadian Jonathan Duhamel in 13th place for $25,620 when losing out to Habib – meaning no Shooting Star made the final table for the first time in this event’s history.

Habib and Kim Collect One Bounty Each

That was Habib’s only bounty – which gave him $5,000 extra, as well as a signed T-shirt from Duhamel – while Kim could also only manage a single Shooting Star scalp when sending Nam Le to the rail on Day 2.

With 36 players paid, Andrew Watson just made the money for $16,000, while Carbon Poker Pro Kathy Liebert just missed out in 37th, as did David Pham in 38th.