The popularity of the Full Tilt Online Poker Series was confirmed on Monday night, as all three tournaments more than reached their guaranteed prize pools. 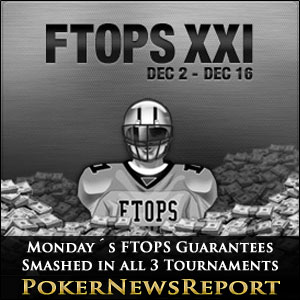 The popularity of the Full Tilt Online Poker Series was confirmed on Monday night, as all three tournaments more than reached their guaranteed prize pools.

Plenty of big names turned up to fight out the $1,060.00 multi-entry buy-in FTOPS #3. Matt Frankland, Mike McDonald and Chris Moorman all left empty-handed, but Mickey Petersen managed a min-cash behind eventual winner “fowirls” who shipped the $149,950 first prize after a deal was made on the final table.

Again the guarantee of $300,000 was smashed, as 705 entries more than doubled the prize fund and 72 players in the event got paid. Unlucky player 73 – Sweden´s “Kask123” – will be invited back to the virtual felt to complete in a “Bouncebackability” freeroll on the 22nd December, with a buy-in to the FTOPS XXII Main Event available for the winner.

The NL Hold´em Turbo Rush tournament was always going to be popular, and 1,018 players ponied up the $216.00 buy-in to crush the advertised guarantee of $100,000. Despite double the anticipated field, the tournament only lasted two hours – at the end of which Poland´s “gorskow” had scooted with the loot.

Plenty of big names also participated in this tournament – Chris Moorman, Joao Barbosa and Melanie Weisman all falling just outside the money. One other player failing to cash in this event was Jeremiah “Believer8219” Vinsant – but his two cashes to date in FTOPS Events #2 and #3 have taken him to the top of the FTOPS XXI Leaderboard competition.

You can play in the FTOPS XXI until the 16th of december 2012. For all the latest news about the Full Tilt Online Poker Series XXI, results and schedules, follow PokerNewsReport on Twitter.