The PokerStars European Poker Tour (EPT) Grand Final is returning to the tiny – but extremely wealthy – principality of Monaco in April after last year’s event was staged in Spain. 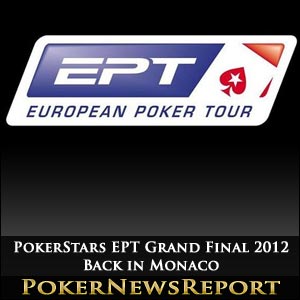 The PokerStars European Poker Tour (EPT) Grand Final is returning to the tiny – but extremely wealthy – principality of Monaco in April after last year’s event was staged in Spain.

The Monte Carlo Bay Hotel & Casino had hosted the tournament for six successive years until it was moved to Madrid’s Gran Casino last year, but now Monaco will again stage the Grand Final this year from April 23 to May 1.

Edgar Stuchly, the EPT president, expects a thrilling tournament come April, when they will stage “the biggest and best EPT festival ever” for what will be “an incredible tournament”.

As is the custom, the Grand Final’s biggest attraction will be the €10,600 buy-in main event, which was last year won by Ivan Freitez when the Venezuelan outlasted 685 opponents to take possession of the €1.5 million top prize, as well as a €10,000-plus Shamballa Jewels bracelet, in Madrid.

The main event won’t actually possess the biggest buy-in in Monaco, with that honour going to the latest addition to the schedule – a €100,000 Super High Roller tournament.

The PokerStars Caribbean Adventure (PCA) on Paradise Island features a very similar super high roller tournament every January, but this Monaco event will be the first to be staged in Europe.

With the prospect of becoming the inaugural EPT Grand Final super high roller champion, big-name players such as this year’s PCA champion, Viktor ‘Isildur1’ Blom, are sure to sign up for the tournament – of course hoping to come close to the $1,254,400 the Swedish online specialist collected a few weeks back in The Bahamas.

There are just four other stops on the EPT’s Season Eight schedule, following events in Tallinn, Barcelona, London, San Remo, Loutraki, Prague, Paradise Island, and Deauville, before the tour pulls into Monaco at the end of April.

The €5,300 buy-in main event during the Deauville leg of the EPT was this week won by Belarusian Vadzim Kursevich for €875,000 when he outlasted 888 other starters.

For a full list of side events at any of the final five EPT stops – apart from the Grand Final, which will soon be released – why not take a visit to www.europeanpokertour.com.