Mohsin Charania pulled off one of the most amazing comebacks in live poker history to deny one-time massive chip leader Vasili Firsau victory in the WPT Paris. 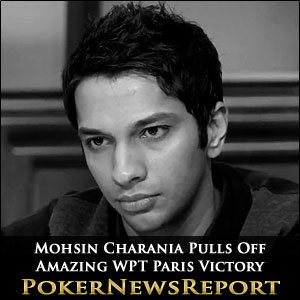 Mohsin Charania pulled off one of the most amazing comebacks in live poker history to deny one-time massive chip leader Vasili Firsau victory in the WPT Paris.

The conclusion of the WPT Grand Prix de Paris Main Event was one of the most amazing that has ever been witnessed – ever! Vasily Firsau had entered the final day of the event with an apparently insurmountable chip lead – three times the average chip count and a stack almost four times the size of his closest rival – after having led the Main Event for two days.

Behind him on the leaderboard, Christine Lindley was attempting to become the first female winner of an open WPT Main Event, while Elliot Smith was on a roll after recovering from having just 12 Big Blinds on Day 3, and Mohsin Charania was looking to add to a WPT title to the EPT Grand Final Main Event he won in 2012. The six-handed final table was completed by short stacks Peter Apostolou and Kimmo Kurko, who had just 20 Big Blinds between them.

Kurko Out, but Apostolou Survives

The fates of Kimmo Kurko and Peter Apostolou went in very different directions at the start of the WPT Grand Prix de Paris final table. Despite twice doubling up 10♥ 10♣ > A♣ 7♥ (v Elliot Smith) and A♦ 4♥ > Q♠ 7♠ (v Vasili Firsau), Kimmo Kurko´s luck ran out when he shoved for the third time within the first hour with A♠ Q♣ and failed to improve past Vasili Firsau´s J♠ J♦.

Charania Recovers, but Lindley and Smith Fall to Firsau´s Force

Christina Lindley was unfortunate to be eliminated in fifth when she chose the wrong moment to jam her A♠ K♦ into Vasili Firsau´s A♦ A♣ and, a few hands later, Elliot Smith was to join her on the rail when his A♦ 6♥ failed to find the Ace he needed to overcome Firsau´s J♠ J♣, and he was bust from the WPT Grand Prix de Paris final table in fourth.

Firsau Spikes a King and Leads into Heads-Up

Charania put a little distance between himself and Apostolou when doubling up against Firsau A♣ J♠ > K♥ J♣, and it was Peter Apostolou who was to eventually leave the final table in third place after Vasili Firsau (A♣ K♣) spiked a King on the River to best Apostolou´s pocket Queens – Vasili´s fourth KO on the final table giving him a 4,898,000 -v- 712,000 chip advantage against Mohsin Charania going into the heads-up.

Two double ups during Level 25 (blinds 15,000/30,000 – ante 5,000) gave Mohsin Charania a little breathing room at the start of the heads-up encounter, but some aggressive betting by Vasili Firsau reduced Charania to below 600,000 chips by the end of the following level. With blinds now increasing to 25,000/50,000 (ante 5,000) Charania was shoving practically every second hand, and he eventually he got a call from Firsau – who was to be just one card away from winning the WPT Grand Prix de Paris Main Event:

Firsau paired his Ace on the flop of A♠ 3♥ 10♠ to be a 92 percent favourite to win the hand and the WPT Paris Main Event, and the 2♣ on the Turn made little difference to the likelihood that the game was about to be over. However the 5♦ spiked on the River to give Charania a Wheel straight and double him up to 1.2 million chips.

Charania Profits from the Momentum

A flopped straight enabled Mohsin Charania to get another 800,000 chips closer to the chip leader, before a gutshot straight on the River put the two players practically level on chips. Charania took the chip lead when his A♣ 7♦ was good enough to take down another valuable pot (Ace high) and he used his advantage to steam into a 3.87 million -v- 1.72 million chip advantage at the beginning of Level 29 (blinds 40,000/80,000 – ante 10,000).

It was now Vasili Firsau´s turn to start shoving, and although he got his first jam through uncontested, it was the second which was to prove his downfall and give Mohsin Charania victory in the WPT Grand Prix de Paris Main Event.

In a post-match interview, an emotional Mohsin Charania acknowledged that he had been “lucky a few times” and considered himself to be blessed by having won the WPT Grand Prix de Paris Main Event. He joked that his plan had been to get as short-stacked as possible on the final table before mounting a comeback, but he had not planned to be quite as short-stacked as he was going into the heads-up.