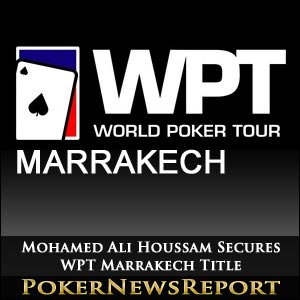 Having seen off 273 other players, Houssam also earned a seat for the $25,000 WPT World Championship at The Bellagio in Las Vegas next May.

Houssam stayed in contention throughout the four days, leading the 149 survivors from Day 1 and, with just 50 remaining after Day 2, he was still close to the top of the leaderboard.

Team PokerStars pro Grospellier and last year’s World Series of Poker (WSOP) main event champ Duhamel, meanwhile, were also still in with a great chance of victory after ending the second day inside the top five behind chip leader Ian Marmion, of Ireland.

That gave us the official final table of six, with Maxsims Martinovs having taken the chip lead from Mattern.

The Latvian pushed further ahead of his five opponents when securing a good-sized pot against Houssam, although the Moroccan did regain some chips soon after when beating Rodney Assous to a pot.

Small blind Houssam opened before the Frenchman shoved all-in when holding A♥ K♠. Houssam showed J♥ J♦ when calling and had eliminated Assous in sixth place for €34,192 when the board showed 10-high.

Another Frenchman, Hassan Fares, was out in fifth spot for €42,185 not long after when his fives were beaten by the K♦ 10♥ of Ourini, who paired up when a 10 arrived on the turn.

The action was really hotting up now, and Houssam grabbed another huge pot as he doubed-up through Martinovs when his A♠ A♦ beat the Latvian’s 9♦ 9♣.

However, Mattern was struggling as the short stack and went all-in against Martinovs.

The third Frenchman at the final table showed A♠ 8♦ to face Martinovs’ 7♣ 7♠. A flop of K♠ J♠ 10♠ arrived to provide Mattern with many possibilities. However, the 5d on the turn and K♦ on the river could not save him and Mattern was out in fourth place for €57,727

Now down to just three players, Houssam was again the short stack, but doubled-up twice – once each against Martinovs and Ourini – to take the lead chip.

It wasn’t long before heads-up play began when an enthralling hand saw Martinovs hit the rail in third place for €88,811.

The Latvian, on the button, opened and small blind Ourini big blind and Houssam called. The flop showed 6♠ 5♣ 3♠ and Ourini led out with a 300,000 – or about two-thirds of the pot. Houssam quickly folded, but Martinovs went all-in with his remaining 950,000 chips.

Ourini considered his options for some time before making the call with just two overcards in J♥ 9♣. Martinovs, on the other hand, held 6♣ 3♣ for two pair and looked sure to double-up.

However, the 5♠ on the turn paired the board and the 9♥ on the river supplied Ourini with a better two pair to eliminate Martinovs.

The former increased his lead for a short while, but Houssam moved over three million ahead when he found a 10 on the river to give him trips.

Strangely, for such an exciting final table, the last hand started of quietly as Houssam limped in from the button and Ourini checked.

There was still no sign of either player going wild as both checked a K♣ 8♦ 3♠ flop. However, when the Q♦ arrived on the turn, all that changed as Ourini led out with 370,000.

Ourini needed something big on the river, but the 6♥ was not it – and Houssam was champion.

Ourini played a hard and skilful game, but could not quite cope with Houssam’s aggression and had to be satisfied with €137,657 as runner-up.