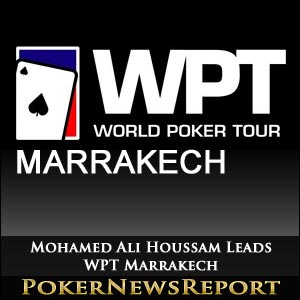 The entry is of particular note as, with the world of poker in something of a slump following the events of Black Friday back in April, organisers were concerned that numbers would dip compared to last year.

However, an exciting day’s play saw 52 extra players on last year’s field of 222, with many entrants just registering in time for the main event.

Houssam – who picked up the Marrakech Poker Open in May for $53,518 – made his move up the leaderboard just when the players were breaking for dinner.

Just the Moroccan and Marvin Rettenmaier were left playing and they went head-to-head on a pre-flop pot that saw all their chips in the middle.

The German showed A♦ K♦ while Houssam placed Q♣ Q♦ on the table. Rettenmaier found two pair, only for Houssam to win the pot with three queens.

That sent Rettenmaier to the rail, while Houssam moved up to 145,000 in chips – and his meal must have tasted all the nicer because of that success.

Swiss star Sam El Sayed blew right past Houssam not long after to hit a high of 198,000 chips.

The Swiss made a continuation bet of 1,500 after play had been checked to him, and again the big blind made the call.

Both then checked the 3♠ turn, before the Ac arrived on the river. The big blind checked one more, but El Sayed put in 2,500 and his opponent mucked while showing 10♥ 8♣.

However, 2010 World Poker Tour (WPT) Amneville champion El Sayed was soon cut down somewhat when he came up against Eugene Katchalov and Julien Arneodo.

In the big blind, New York-based Ukrainian Katchalov checked a flop of A♦ 7♥ 6♦, only for El Sayed to bet 2,500 in the cut-off position. Arneodo, on the button, called, as did Katchalov after pausing for a few moments.

The 8♥ came on the turn and the action was checked to Frenchman Arneodo, who placed 8,000 into the pot. Katchalov again thought long and hard before making the call, while a bewildered-looking El Sayed shook his head before calling.

The river provided the trio with the 4♣ and the Ukrainian checked to the Moroccan, who took close on four minutes before making a 28,300 bet.

Arneodo took a brief look at Katchalov, but then moved all-in, with Katchalov and El Sayed quickly folding to leave the Moroccan on 130,000 in chips.

El Sayed dropped further back to end the day on 103,600 and in 12th place, and may well struggle to stay in the tournament with Katchalov and Bertrand ‘ElkY’ Grospellier – fresh from his kickboxing loss to friend and fellow Team PokerStars Pro Lex Veldhuis – at his table today.

However, players such as Guillaume Darcourt, Marvin Rettenmaier, Almira Skripchenko, John Eames and James Akenhead – a two-time WSOP finalist – did not enjoy a great day and crashed out before the end of the eighth level.