The Mobile Poker Club has joined the fast-fold online poker realm by launching “Next! Poker,” its own variation of the popular quick-paced action. 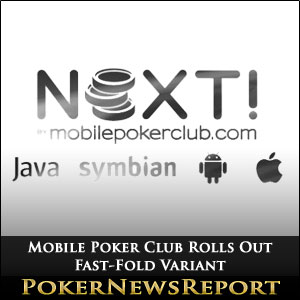 The Mobile Poker Club has joined the fast-fold online poker realm by launching “Next! Poker,” its own variation of the popular quick-paced action.

The announcement was made on the site’s Facebook page yesterday and likely has grinders who play on the go quite excited about racking up more hands, and thus, greater rakeback profits. In promoting online poker that is exclusively mobile-only, the Mobile Poker Club is the first such site to go that route.

Next! Poker is available on smartphones and tablets and allows players to quickly fold their undesirable hands and be jettisoned to a new table. First made popular by Full Tilt’s Rush Poker in 2010, the scheme removes some of the waiting around typically associated with poker playing. Many fast-fold variants have entered the space first occupied by Full Tilt, including Zoom Poker at PokerStars and Fast Forward at PartyPoker.

The Mobile Poker Club boasts of having more than 2.5 million registered players. The site has dealt over 200 million hands since its inception and that number will likely increase much more quickly now that a greater number of hands will be played in rapid fashion at Next! Poker. The Mobile Poker Club is licensed and headquartered in Curacao.

For players wishing to try out the Mobile Poker Club, play-money offerings are available. The real-money lobby lists games that begin at stakes of$0.02/0.04 and progress much higher for those accustomed to wagering at higher levels. Cash games, SitNGos (SNGs) and multi-table tournaments (MTTs) are available, with multi-tabling restricted to a maximum of four tables.

A 100% first-time deposit bonus that tops out at $500 and permits six full months to clear is one of the many perks available to new sign-ups. Additional benefits include 10% to 30% rakeback dependent upon the amount of rake generated, a large number of freeroll tourneys, and monthly leaderboard prize pools for MTTs and SNGs.

Playing poker on the go has become more and more popular and is expected to increase to even greater heights as technology progresses. Other sites such as Terminal Poker and Switch Poker are dedicated to mobile poker playing and many online poker sites have also rolled out apps in which players can log on via their mobile devices. Those who have not yet joined the mobile poker party are likely researching and developing offerings of their own.