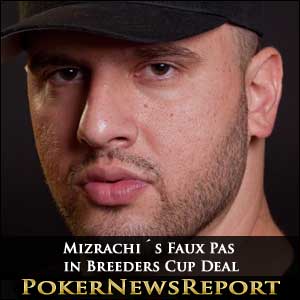 Now, although this is good news for Mizrachi who will receive VIP treatment at Churchill Downs in November, we wonder what sort of impression the wording of the announcement gave to the members of the Senate debating new online poker legislation.

Supporters of Senator Joe Barton´s Online Poker Bill would have been delighted with the recent news from France that a “Criminal Court of First Instance” (lower court) in Toulouse had ruled that poker is a game of skill. However, they will be disappointed with the statement from Breeders Cup Vice President of Media and Entertainment, Peter Rotondo, which accompanied the Mizrachi sponsorship announcement – “We believe that there is a strong cross-over between poker and horse racing, which has not yet been realized”.

So, is the Breeders Cup VP of M&E suggesting that there is skill connected with betting on the gee-gees? Highly unlikely. Instead, he has just strengthened the perception that poker is gambling – a perception which has not been helped by Mizrachi commenting that “I’ve long been a huge horse racing fan and I am pleased to have this opportunity to align myself with the richest horse racing event with such large wagering pools”. (We put the bold on for emphasis)

Well, Of Course You Are!

Mizrachi is the youngest player to feature in the poker’s top ten career money list, with more than $11 million in career tournament earnings. For him, this is just a posh day out at the races – one he could have afforded without sponsorship from the Breeders Cup organisers. The underlying damage that this deal has potentially done to the many thousands of American citizens who once relied on online poker as an income (albeit an illegal one) is immeasurable.

The Pro-Online Poker School of Thought

Last year, the International Mind Sports association acknowledged that poker was a game which required as much skill as chess when welcoming the International Federation of Poker into its membership. More recently, the American National Bureau of Economic Research came to the same conclusion, and only last week Greg Raymer of FairPlayUSA (and ex WSOP Main Event winner) was commended for his intelligent and educated comments about skill in poker distinguishing the strongest players from the weakest.

If poker is ultimately deemed to be a game of skill by the men on Senate Hill, it is highly likely that earnings from poker – both live and online – will be reported to the IRS and taxed at a higher rate than they are currently. Either Mizrachi is looking after his own self-interest by hijacking the pro-online poker lobby, or has just made one of the biggest faux pas of his professional career!