Michael Mizrachi leads the remaining 230 players in the World Series of Poker Europe Main Event as the two Day 1 fields combine in Cannes. 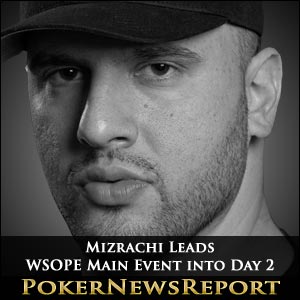 Michael Mizrachi leads the remaining 230 players in the World Series of Poker Europe Main Event as the two Day 1 fields combine in Cannes.

The good fortune that helped Michael Mizrachi to third place in the Pot Limit Omaha event last week continued on Saturday. Mizrachi finished Day 1A with 234,850 chips – a 44,000 chip advantage over Day 1B top chipper Bertrand “ElKy” Grospellier – after dispatching Konstantinos Mamaliadis to the rail with 8♠ 6♣ > Q♦ Q♥, beating Arnaud Anatole´s turned straight with a rivered flush (K♦ 10♣ > A♥ K♣) and eliminating Vanessa Selbst in the last level of the day (hands unknown).

Mizrachi was not the only player to enjoy good fortune over the weekend. ElKy Grospellier had seen his Day 1B starting stack dwindle to 25,000 chips prior to hitting runner runner Queens for Quads and then rivering the 10♥ to make two pair against his opponents lower turned two pair. Phil Hellmuth also had a river card to thank for the elimination of October Niner Steven Gee (A♥ Q♦ > 7♣ 7♦), while Ashton Griffin prevented Liv Boeree from being overnight chip leader when catching a runner runner Flush to best Boeree´s two pair Aces and Kings.

Liv Boeree still managed to finish as the top British poker player after the two Day 1s with 94,650 chips ahead of Sam Trickett (90,100), Salman Behbehani (86,900) and Matt Frankland (81,625). Last year´s UK final tablist Max Silver still remains in the tournament (51,975), but the two compatriots who joined him last year – Chris Moorman and Jake Cody – will not be joining him as Moorman bust out on Day 1a while Cody stayed in the UK. The 2011 winner – American Elio Fox – is also still in contention with 83,025 chips.

Day 2 of the WSOPE Main Event will comprise of 6 ninety minute levels with blinds starting at 300-600 (ante 75) and 230 players still chasing the €1,022,376 first prize. Only the top 48 players will cash, so it is not expected that anybody will be sniffing the money until the dinner break on Tuesday, but those closest to a cash at the start of Day 2 include:-