Michael ‘The Grinder’ Mizrachi finished Day 4 of the $50,000 buy-in Poker Players Championship event #45 at the World Series of Poker atop the leaderboard. 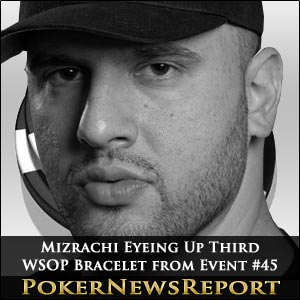 Michael ‘The Grinder’ Mizrachi finished Day 4 of the $50,000 buy-in Poker Players Championship event #45 at the World Series of Poker atop the leaderboard.

The two-time bracelet winner from Florida is in a great position to bag his third piece of WSOP jewellery in Las Vegas, sitting on 3,648,000 chips, although recent series winner Andy Bloch is just 50,000 behind on 3,598,000.

A thrilling Day 4 at the Rio All-Suite Hotel & Casino started with 26 players – led by Swedish online sensation Viktor ‘Isildur1’ Blom – from the original 108-strong field, but 10 would leave without cashing as the smallest prize was not awarded until a 16th place finisher was discovered.

The field was reduced to 17 survivors following the exit of nine stars of the game, with Antony Lellouche (26th), Phil Hellmuth (25th) – for his 91st WSOP cash – Michael Glick (24th), David Chiu (23rd), Lyle Berman (22nd), Robert Mizrachi (21st), Joe Cassidy (20th), Phil Ivey (19th) and John Monnette (18th) all falling short of the cash. By the way, those nine players have 31 bracelets between them, highlighting the quality of pro entered in this tournament.

With the eliminations of those excellent players, the field was on the money bubble – and the unlucky player to exit in 17th was Ben Yu. With the bubble looming large, Yu held only 3,000 chips after losing a huge Limit Hold’em hand to fellow Los Angeles player Daniel Alaei.

Ben Yu is The Bubble Boy

He managed to battle back through a few pots to chip up to 21,000, but eventually hit the rail during a hand of Stud-8 with New York State’s Roland Israelashvili. Yu’s final hand saw him make two pair, eights and threes, as well as an eight-four low, but Israelashvili had a seven-high straight and a six-five low to gather in the whole to and confirm his opponent’s exit.

Just one more player had to be eliminated before Day 4 ended with a final table, with California’s David Oppenheim the man to fall short. He had become the short stack but doubled-up through Philadelphia’s Chris Klodnicki, only to his chip stack drop back down before finally exiting to Mizrachi in ninth place for $142,197.

The on-fire Mizrachi – who won this very event two years ago for $1,559,046 as his first bracelet – is certainly looking good for a treble of successes at the Rio, with this latest eight-game format event offering a $1,451,527 top prize, the coveted gold bracelet and the David ‘Chip’ Reese Trophy.