Party Poker´s Monster Series got underway yesterday to a bit of a mixed start. Although the first three events were very popular, only three of the remaining twelve tournaments managed to meet their guarantees – resulting in first day overlays of nearly $50,000. 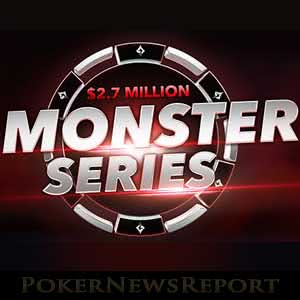 Party Poker´s Monster Series got underway yesterday to a bit of a mixed start. Although the first three events were very popular, only three of the remaining twelve tournaments managed to meet their guarantees – resulting in first day overlays of nearly $50,000.

Party Poker´s low buy-in Monster Series is a week-long warm up for the major PowerFest series starting next Sunday May 6th. The series consists of 120 events over eight days (123 events if you are a female player), with each day featuring a specific type of NL Hold´em tournament – i.e. Monday is 6-Max PKO day, Tuesday is 8-Max NLHE day, etc.

Normally, you would expect the first day of a series to meet expectations and the tournaments to meet their guarantees. But yesterday, despite a promising start, nine of the fifteen events resulted in overlays – the feature event of the day (a $33.00 buy-in NLHE tournament guaranteed for $200,000) failing to meet its guarantee by more than $36,000.

Further Overlays Likely throughout the Week

Looking ahead to rest of the week, the Monster Series schedule is packed full of opportunities for further overlays. There are several tournaments scheduled each day with guaranteed prize pools more than 3,000x the buy-in and next Sunday´s “Championship Event” has the same buy-in as yesterday´s feature event, but a guaranteed prize pool of $300,000.

If the pattern of overlays continues throughout the series (and assuming it doesn´t get any worse), the total amount of extra value of the tables will exceed more than $250,000. It does not look too good for the $40 million guarantee PowerFest series starting next week, although there could be several reasons why yesterday´s events performed so disappointingly.

Potential Reasons for so many Overlays

One of the more likely reasons for the number of tournaments failing to meet their guarantees yesterday is that there were too many low buy-in NLHE events for players to choose from. It was noticeable that the higher buy-in tournaments in Party Poker´s regular Power Series schedule mostly met their guarantees yesterday, as did the [geolink href=”https://www.pokernewsreport.com/party-poker-adds-daily-plo-events-to-power-series-22331″]recently-added PLO tournaments[/geolink].

A second reason is that there were a lot of mega-satellites running around the same time as the Monster Series tournaments that failed to meet their guarantees. One in particular – an $11.00 buy-in mega-satellite guaranteeing fifty $109.00 PowerFest tickets – attracted 1,058 entries, nearly doubling the number required to meet its guarantee.

A Good Time to Play at Party Poker

With Power Series tournaments and PowerFest mega-satellites continuing throughout the week, this could be a good time to play in the Monster Series events as there will likely be plenty of overlays to take advantage of. Another good reason for playing at Party Poker this week is the site´s PowerFest “Deposit Prize Draw” which takes place on Friday (4th May).

The draw will give away more than $52,000 in PowerFest tickets to five lucky winners. Each winner will receive tickets for ALL the PowerFest events within a “deposit range”. For example, for each deposit you make between $10.00 and $99.00, you will be awarded an entry in the “Micro-Tickets Draw” in which you can win an entry into every Micro buy-in event in the PowerFest series.

There is no limit on the number of deposits you can make to take advantage of this promotion; but, in order to qualify for the draw, the deposits must have cleared in your account by midnight (CET) on Thursday 3rd May and you must have earned at least one Cashback Point by the time the draw is made on Friday. If you are lucky enough to win a package in the PowerFest Deposit Prize Draw, well done. If not, there is still plenty of free money on the tables during this week´s Monster Series at Party Poker.