Mitch Johnson Leads UKIPT Nottingham at Close of Day 1A 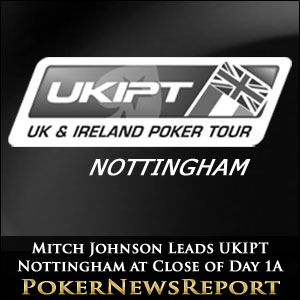 The first of three opening flights in the £500,000 guaranteed UKIPT Nottingham Main Event was hosted at the Dusk till Dawn Poker Club in Nottingham on Wednesday and, although Day 1As are traditionally quiet, organisers will be particularly disappointed with yesterday´s turn-out.

Only sixty-one players ponied up the £1,100 buy-in (or qualified online) to take part in the first UKIPT Main Event to be played in 6-Max format and, after ten levels of action, only 24 players will carry forward chips into Saturday´s Day 2.

At the head of the chips counts is Derbyshire´s Mitch Johnson, who made the short journey along the A52 worthwhile by bagging up 171,500 chips at the end of the night – 65 Big Blinds ahead of his nearest rival (Adam Reynolds – 93,100 chips) and three times the size of the average stack.

Johnson Leaves it Late to Lead

Mitch Johnson did not get off to the best possible start on Day 1A of the UKIPT Nottingham Main Event – losing 1,800 chips of his 20,000 chip starting stack in one of the first hands of the day against David Burghardt (K♠ 8♣ – flopped two pairs, rivered a Full House); and it was Burghardt who was one of the early chip leaders after flopping a set to bust out Alex Martin 9♣ 9♥ > Q♣ Q♠.

Thereafter the chip leaders flip-flopped throughout the next few levels – Ben Vinson bossing his table for a while before Adam Reynolds took over at the top of the chips counts by busting out Julian Thew (pocket Nines > King-Jack) and Liv Boeree (pocket Queens > Ace-Queen suited).

Johnson got his revenge on David Burghardt by busting him out of the UKIPT Nottingham Main Event Aces > Sevens, before finishing a successful final level with the elimination of popular DTD regular Kyriacos ‘Greek Jack’ Dionysiou Queen-Seven > King-Jack on a Queen-high board.

Early Contender for Pot of the Tournament

One of the biggest pots of the day concerned David Manning, John Bousfield and Kevin Smith. A little bit of pre-flop three-betting had built up quite a substantial pot, but after the rainbow flop of K-Q-J, it all got a little bit crazy and all three players got their chips into the middle to create a pot of 108,000 chips.

The straight held to treble up David Manning, while John Bousfield took the side pot and Kevin Smith was eliminated.

So, Where is Everybody?

The number of pre-registrations for Days 1B and 1C of the UKIPT Nottingham Main Event imply that there will be more bums on seats today and tomorrow. PokerStars qualified more than 150 payers online into the Main Event, and Dusk till Dawn have also been running plenty of satellites – both live and online – into the tournament.

The start of the UKIPT Nottingham Main Event also coincided with Day 1 of the UKIPT High Rollers, which saw players such as Jake Cody, David Vamplew, Mickey Petersen, JP Kelly and Chris Brammer all part with £2,200 to play their own 6-Max tournament. The High Rollers is scheduled to conclude this afternoon, so a few of those players are likely to leave their participation in the Main Event until Friday.

Meanwhile, in the unlikely event that there is an overlay in the £500,000 guaranteed UKIPT Nottingham Main Event, those in the best positions to take advantage of it include: