Though his attempt at passing an online gambling bill failed last year, Mississippi Rep. Bobby Moak has reintroduced a similar measure this year. 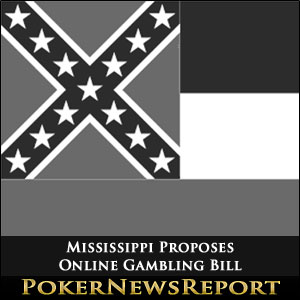 Though his attempt at passing an online gambling bill failed last year, Mississippi Rep. Bobby Moak has reintroduced a similar measure this year.

Moak last week proposed House Bill No. 254, the Mississippi Lawful Internet Gaming Act of 2013, that would allow the Gaming Commission to issue permits to those entities already holding existing gaming licenses. The proposal has been passed on to the House Ways and Means Committee, the same committee where it unceremoniously died in 2012 as House Bill 1373 after only two weeks before committee members.

Moak, member of the committee, is obviously hoping for a different result this go-round with essentially the same bill. He is aiming to create jobs and keep revenue in Mississippi that is currently going to offshore online gambling operators. However, persuading his fellow lawmakers in the heart of the Bible Belt that online gambling would be benficial to Mississippians may be an uphill battle.

Though Mississippi has permitted riverboat gambling since 1990 and land-based casinos since 2005, it is one of a handful of states that currently do not allow gambling on the lottery. Such gambling is viewed by many to be a tax on the poor, taking dollars on a risky venture from those who can least afford it. And many critics believe that Mississippi legislators view online gambling in the same light.

In any event, Moak will try again to bring Internet gambling to the Magnolia State. His proposal calls for intrastate wagering and requires operators to show that they will have safeguards in place to prohibit minors and those outside of state borders to participate. A non-refundable $100,000 deposit is required of operators who wish to apply for an online gambling permit. If approved, that deposit would go toward the license fee of $200,000. Initial licenses would be valid for five years.

Mississippi joins a number of states that are considering online gambling legislation, perhaps spurred on by the failure of the Reid-Kyl bill on the federal level during the lame duck session of Congress. The New Jersey legislature recently approved legislation that awaits only Gov. Chris Christie’s signature, California Sen. Rod Wright re-introduced a poker-only proposal in late December, and industry scuttlebutt has Illinois and Iowa possibly getting into the act soon. If any of those states are successful, they would join Nevada and Delaware as the only states that have passed some form of Internet gambling legislation.