This weekend sees the climax of the Full Tilt Poker Mini-FTOPS series with almost $1.5 million guaranteed in prizes over the seven remaining events. 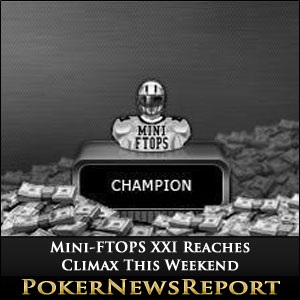 This weekend sees the climax of the Full Tilt Poker Mini-FTOPS series with almost $1.5 million guaranteed in prizes over the seven remaining events.

The low buy-in Mini-FTOPS XXI series has already been a resounding success, with the guaranteed prize pools being smashed in each of the 28 tournaments played to date and in many cases being doubled – or, in the case of yesterday´s Razz tournament, more than trebled.

This would imply that as much as $3 million could be played for over the next three days, the climax of which is the $75.00 buy-in multi entry $750,000 guaranteed Main Event. But, before Sunday´s feature tournament, players have a fantastic choice of events to get involved with.

Saturday is one of the busiest days in the whole tournament schedule, with the first of three major events being the two-day Mini-FTOPS #31. This multi entry $216.00 buy-in NL Hold´em tournament gets under way at 11.00am ET (4.00pm GMT) and plays on Saturday until the money has been reached or for 17 Levels, whichever is the longest. Play in the two-day tournament resumes at 10.00ET (3.00pm GMT – please note the earlier start time) and continues until a winner is crowned in the $300,000 guaranteed event.

Mini-FTOPS #32 is a Stud Hi/Lo tournament which is scheduled to start at 14.00pm ET (7.00pm GMT). Possibly the quietest event of the weekend, this tournament carries a guaranteed prize pool of just $7,500, but should still attract a reasonable field with a buy-in of just $22.00.

One event which is almost certain to smash its $75,000 guarantee is the $11.00 buy-in NL Hold´em Rush Re-Buy tournament which starts at 16.00pm ET (9.00pm GMT). The low buy-in and $75,000 guarantee is sure to attract a huge number of players to Mini-FTOPS #33 for which late registration is available for one hour.

The two events which start on Sunday already $1 million guaranteed in prize money between them. Mini-FTOPS #34 is a $26.00 buy-in multi entry 6-Max Knockout NL Hold´em tournament which, in addition to offering $250,000 in prize money, also rewards players with a $4.00 bounty for knocking out an opponent. The Knockouts start at 10.00am ET (3.00pm GMT).

The series $750,000 guaranteed Main Event Mini-FTOPS #35 gets going at 13.00pm ET (6.00pm GMT) and this multi-entry SuperStack NL Hold´em tournament has a late registration period of 3 hours – an indication of how late the game may go on for if you are planning on getting into the money. The buy-in of $75.00 may be a bit steep for some bankrolls, and consequently a $5.50 super-satellite is scheduled for 10.30am ET (3.30pm GMT) which will offer 75 seats to the Main Event.

At the head of the pack at the minute is Ukrainian poker player Ivan “Shepa777” Sheptytskyi, who won Mini-FTOPS #5 and cashed in five other events (only two of them qualifying for leaderboard points). However his points total of 496 could be surpassed by any of the chasing pack should they enjoy a better weekend than the Ukrainian in the Mini Full Tilt Online Poker Series XXI.