Online qualifier Malte Moennig was the only player to bag up more than 1 million chips at the end of Day 3 of the European Poker Tour Grand Final in Monaco. 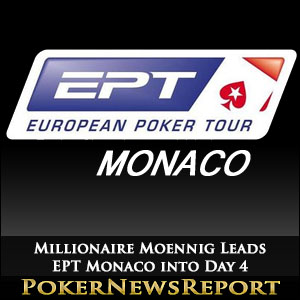 Online qualifier Malte Moennig was the only player to bag up more than 1 million chips at the end of Day 3 of the European Poker Tour Grand Final in Monaco.

Day 3 of the EPT Grand Final was the day on which the Main Event money bubble burst, and 96 of the 123 players who returned to the Monte Carlo Bay Resort were at least justified in making the trip to Monaco to participate in the event.

Slow Start to Day 3 of the EPT Monaco

As is typical when the risk exists of being bust from an event just short of the money, the speed of the play was laboured when the 123 players took their seats for Level 15 (blinds 1,500/3,000 – ante 400). Despite the slow start, players still managed to get themselves eliminated, and PCA Main Event Champion Dominic Panka contrived to lose all his chips in the first hand of the day against Christoph Vogelsang A♦ K♦ > 8♥ 8♦.

Another PokerStars sponsored player – Andre Akkari (A♠ 9♦) – went fishing for an open-ended straight on the flop of 10♣ J♥ Q♠, but was busted out of the money by Mohsin Charania´s paired Queen; and one of the final tablers in last weekend´s Super High Rollers event – Rono Lo – made a shocking call when moving all-in unnecessarily (for 160,000 chips) with J♣ 10♥ on a flop of 9♥ 7♣ K♦, and running into David Yan´s A♥ K♠.

Agshin Rasulov is the Bubble Boy

As hand-for-hand play began, the pace of the EPT Monaco Main Event slowed even more. Hands were taking up to ten minutes to play out, and two players had less than one big blind remaining by the time that Agshin Rasulov called Kenny Hicks shove with A♠ 10♣ on a board of 9♣ A♥ Q♣ / 10♠. Hicks rolled over Q♥ Q♦ for a set of Queens and Rasulov was the last player to leave the EPT Monaco Main Event without showing a profit.

With the remaining ninety-six players now all assured of a €19,200 min-cash, the tempo of the game quickened substantially and players fell in droves as they tried to spin up their short stacks. Jason Duval, Stephen Chidwick and Ana Marquez were among the leading names to bust from the tournament as soon as the money bubble burst, and they were shortly followed by Sam Trickett and Philip Gruissem – both adding a min-cash to their substantial live poker earnings.

Chip Leaders Run Up Their Stacks in the Post-Bubble Rush

The post bubble rush to the Cahier´s desk was a good time for Malte Moennig, who chipped up considerably when busting Niall Farrell K♥ K♦ > 8♥ 8♦ and then got mighty lucky in a hand against Mihails Morozovs (Moennig A♠ Q♠ -v- Morozovs A♦ J♣) in which both players paired their Ace on the flop, Morozovs caught the J♦ on the Turn and Moennig spiked the Q♦ on the River to send the Latvian to the rail.

Overnight chip leader from Day 2 – Vladimir Troyanovskiy – had the good fortune to trip Quad Fours against Alex Klimashin´s A♥ 10♠, while Sebastian Von Toperczer (9♥ 8♠ – paired Nine on the flop) benefitted from Marcello Marigliano (A♥ Q♥) missing his flush draw to finish the night in second place, and Eros Nastasi bust Sylvain Loosli (Q♥ Q♠ > A♣ 7♣) and Chady Merhej (A♦ A♠ > Q♥ Q♠) to finish Day 3 of the EPT Monaco in third place.

Looking Ahead to Day 4 of the EPT Grand Final

When Day 4 of the EPT Grand Final at noon today, the forty remaining players will be entering Level 20 (blinds 5,000/10,000 – ante 1,000). The plan is for play to continue until just sixteen players remain (or five levels – whichever happens sooner), by which time the prize money will have risen to €55,850.

The first of the forty players to be eliminated today will receive €24,400, and those we not expecting to make an early appearance at the Cashier´s desk include: