Tom Middleton was the only player to bag up more than one million chips at the close of Day 4 of the PokerStars sponsored EPT Barcelona Main Event. 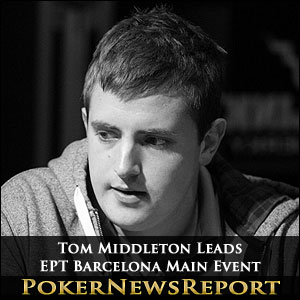 Tom Middleton was the only player to bag up more than one million chips at the close of Day 4 of the PokerStars sponsored EPT Barcelona Main Event.

Five 90-minute levels of play were completed in the EPT Barcelona Main Event yesterday, during which time the money bubble burst and the number of players still alive in the tournament was reduced from 235 hopefuls to just 79 potentials.

With 235 players returning to the Hotel Arts – and only 183 players due to cash in the EPT Barcelona Main Event – the early levels of play were understandably cagey. Several players escaped elimination before the bubble burst by the skin of their teeth – but none more so than US player Russell Thomas.

Just when hand-for-hand play started on the money bubble, Russell Thomas was all-in again – this time with J♣ J♥ against Yann Dion´s A♥ K♦. Thomas was at risk of seeing his extraordinary recovery go pear-shaped, but the J♦ on the flop took the pressure off and not only did Russell Thomas survive the bubble, but he went on to finish the day with 302,000 chips.

When the bubble did eventually burst, it was in the strangest of circumstances. Portuguese Nuno Da Camara had failed to take his seat when play started, and his chip stack of 83,500 chips was blinded down until only one big blind remained. Under the rules of the tournament, his final hand was declared dead as he was not there to play it, and the remaining 183 players breathed a collective sigh of relief knowing they were in the money.

Nobody sighed louder than Austrian poker player Stefan Jedlicka, who was unaware that Da Camara was about to be blinded out, and – despite having A♦ A♣ – unnecessarily put his tournament life on the line with his last 27,000 chips. He was called by Christopher Andler (3♥ 6♣) in the Big Blind, but the Aces held to avoid what would have been the most embarrassing bust-out of all time.

The Rush to the Cashier´s Desk Begins

The two levels of cautious play were quickly forgotten, as players with short stacks either got competitive or accepted their fate. The first player to bust was the aforementioned Stefan Jedlicka and after him players fell like dominoes.

Shannon Shorr, Victor Ramdin and Marvin Rettenmaier were among those who left with €8,680 in their pockets, while players such as Ole Schemion and Kevin MacPhee held on a little longer to pick up €10,000 – which, according to Kevin MacPhee, will be used to enter the EPT Barcelona High Rollers event that gets underway later today.

During the glut of bust outs a great story emerged about Pablo Tavitian who was the chip leader at the close of Day 2. Tavitian – who won the LAPT Chile in March – was in Barcelona to visit relatives and, despite his win in Chile, felt that a direct buy-in to the EPT Barcelona was out of his bankroll.

Having failed to qualify for the Main Event via one of the live satellites hosted at the Casino d´Barcelona, a tilted Tavitian shoved a ten €uro note into a slot machine on his way out of the Casino and picked up the €8,000 jackpot – enabling to buy-in directly after all. Unfortunately, the Argentinean bust out yesterday in 127th place, but collected 10,000 €uros for his efforts.

One of the major beneficiaries of the rush to the cashier´s desk was Tom Middleton. After chipping up quietly to over 400,000 chips, Middleton won a huge pot when eliminating Grudi Hristov Grudev A♠ A♦ > J♦ J♥ and chipped up to over one million chips by busting Kenny Hallaert 7♦ 7♥ > 7♣ 6♠.

Several more players were also taking advantage of the shove-or-fold strategies being used throughout the Hotel Arts. Kevin Vandersmissen (A♠ K♠) found the K♦ on the flop to put paid to the hopes of Kjetil Hansen (J♥ 10♥) and Michel Pecheux also chipped up into the top ten chip counts when he bust Anton Lomarov A♦ A♠ > Q♥ J♦.

Those more focused than most include:-