Sites on the Winning Poker Network have reintroduced the Million or Bust Sit & Go Jackpot game ahead of next weekend´s Million Dollar Sunday. 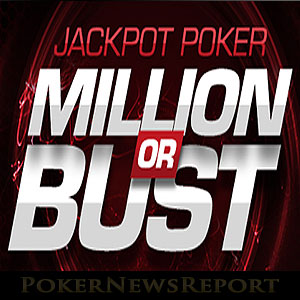 Sites on the Winning Poker Network have reintroduced the Million or Bust Sit & Go Jackpot game ahead of next weekend´s Million Dollar Sunday.

Next Sunday sees the return of the most valuable online poker tournament open to players in the US – the Winning Poker Network´s $1 million guaranteed “Million Dollar Sunday”. Historically the $540.00 buy-in tournament has attracted around 1,600 players from all over the world – resulting in an overlay of $200,000 – but this time the network is going all out to reduce any overlay to the minimum possible.

Via a host of satellites, mega-satellites and sub-satellites starting at Freebuy level, the network is guaranteeing hundreds of seats into the target event for a fraction of the buy-in and recently USAFriendlyPokerSites.com reported on how one player had won his seat via a $0.01 spin on the network´s “Spin to Get IN” slot game.

Now the network has brought back its “Million or Bust” promotion – a three-handed, hyper-turbo Jackpot Sit & Go game with a buy-in of just $15.00 that could randomly award all three players entered into the game a seat in next weekend´s million dollar tournament.

The Million or Bust Jackpot Sit & Go games work in much the same way as a regular Jackpot game. When three players have entered the game, a random prize is spun. In the case of the Winning Poker Network´s Million or Bust games, the prize pools will either be $30, $45, $70 or $1,620.

It is anticipated that 6 games in every thousand will result in players winning seats into the target event. However, the Million or Bust promotion only launched last Friday and, over the weekend, six players won seats in the $1 million guaranteed tournament for just $15 – implying that the Jackpot is likely to hit at least once a day until next Sunday.

In The Money ATM Also Introduced

The Winning Poker Network has also released an innovative feature called the “In the Money ATM”. This feature credits a player´s bankroll with a min cash as soon as the bubble bursts in a tourney they are playing in. As higher payout stages are reached, more money is added to each player´s bankroll while they remain in the tournament until they bust out. Here´s an example of how that works:

The logic behind the concept is that it allows players already in the money to use their funds to play cash games or enter other tournaments. Although some players have commented that if you need the money that quickly, you shouldn´t be playing in tournaments with a $22.00 buy-in, it is a feature that is offered by no other online poker network and should contribute to increased liquidity on sites such as Americas Cardroom and Black Chip Poker.

Despite the best efforts of the Winning Poker Network, there is still likely to be a substantial overlay in next weekend´s Million Dollar Sunday event. It is worthwhile players investigating the satellite routes into the target tournament as many of these will be under-subscribed as well.

We particularly like the $2.20 “On Demand” Re-buy and Add-on satellites. These games start when just 18 players have registered and, although there is a late registration period of an hour and an add-on period after ninety minutes, it is not often that the satellite reaches its full value of $540.00.

These “On Demand” satellites can be of exceptional value during off-peak periods when fewer players are likely to late register – giving players from Europe and the rest of the world an excellent opportunity to qualify for the Million Dollar Sunday for a fraction of the buy-in.