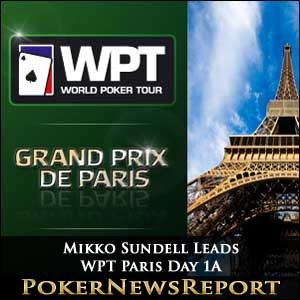 Just three years ago, Europe was regarded with such little importance by the World Poker Tour that there were only two legs of the tour each year hosted in European destinations.

That has now risen to ten and, with an increasing number of entries at each event, could grow even further. As if any more notice was required that European poker players have warmed to the appeal of the WPT, Day 1A of the Paris WPT Main Event was delayed by an hour to enable everybody who wanted be involved in the event registered and seated.

140 players in all entered the first day of the World Poker Tour at the Aviation Club de Paris, leading organisers to believe that last year´s record total of 247 will be eclipsed. They have good reason to hope for an even stronger turn-out  when registrations close on Day 1B today, as many notable players attended the WPT Welcome Part at the Crazy Horse Club on Sunday and were seen at the cash tables during the day – potentially nursing hangovers from the night before rather than entering the tournament!

A Strong Line-Up Compete for the Cash

Among those who remembered to pack the aspirin were UK poker players John Eames and James Akenhead, British Poker Awards Personality of the Year, Kara Scott, and her [geolink href=”https://www.pokernewsreport.com/partypoker”]Party Poker[/geolink] sidekick Mike Sexton. They were joined at the tables by globe-trotting Sorel Mizzi, EPT winner and Epic Poker absentee Arnaud Mattern and former November Niner Joseph Cheong. Even Finnish high-stakes online player Juha “Lokoisback” Helppi managed to turn his back on the WCOOP to attend the event in Paris.

Up and Down for Kara

With 30,000 starting chips each, there was not a great deal of moving and shaking going on in the early levels. An early Kara Scott “collect” was typical of the how play was proceeding – three betting a raise from the button to 1,300 (blinds only 100/200) and c-betting on a flop of 9♥ A♦ 4♠. The opponent folds. Sadly that policy backfired on her a little later when holding 5♣ 5♦ on a flop of 5♠ 4♣ Q♣. Moving all-in, she was snap-called by Pim van Wieringen, who revealed Q♠ Q♦ for top set.

As the blinds started to increase (250/500) a few more bigger pots were seen, and the first players to crack 100,000 chips were Jean Noel Thorel – whose pocket Aces held on against AK – and Kent Lundmark, whose A♦ K♠ busted a player holding K♦ K♠ on a board which fell A♠ J♣ 9♥ 10♠ 9♣. Canada´s Yann Dion hit a flush to crack aces late in the day, and was the first player to breach the 200,000 chip barrier, but he was just overtaken in one of the last hands of the day by Mikko Sundell who will take 203,800 chips into Day 2.