Four World Series of Poker (WSOP) bracelets were won on Friday at the Rio All-Suite Hotel & Casino in Las Vegas. But no events were finished on Saturday, although a few came very close. 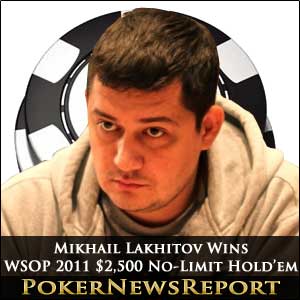 Four World Series of Poker (WSOP) bracelets were won on Friday at the Rio All-Suite Hotel & Casino in Las Vegas. But no events were finished on Saturday, although a few came very close.

Event #36 belonged to former Red Army officer Lakhitov, but it will be his wife who wears the glitzy piece of prestigious jewellery as the Cheborsary native – having had no idea “there was such a thing as a gold bracelet” for WSOP winners when he arrived in Sin City for his first series last year – promised her the prize and used that as his motivation to become a title winner.

Of course, that is exactly what he became on Friday in the $2,500 No-Limit Hold’em event, and now, following two cashes last year – including an eighth place when he first “saw there were pictures with the winner and the bracelet” – the Russian fulfilled that pledge to his “lovely wife” that he would “win a gold bracelet” for her.

With rowdy crowds packed into the Rio, the atmosphere was electric throughout the day, although some competitors were not exactly thrilled by the noise levels as one remarked that he “thought this was poker – not a scene from Animal House”.

However, 30-year-old Lakhitov – who has now cashed in five events this year – outlasted 1,733 other entrants to take the title after four days’ play. He now sits on $898,423 in total WSOP earnings and atop the Player of the Year leaderboard ahead of superstar Phil Hellmuth.

But it is Lakhitov’s background that makes for interesting reading. While working as a Red Army officer in Moscow, he “started playing many different kinds of games” with his comrades during breaks, although it was poker that really enthralled him and friend Kirill Gerasimov – who has also enjoyed a successful career in the game.

So, upon his military discharge five years ago, Lakhitov made the momentous decision to become a poker pro – and hasn’t looked back since as he proclaimed that he is “very proud” to have become one of just a handful of Russian WSOP champions.

Lakhitov – who was born in Volga River port Cheboksary – had to fight off Boston’s Hassan Babajane in their heads-up clash to leave with the $749,610 first place prize as the American pro took $463,480 for his first WSOP cash.

No former gold bracelet winners made the final table – the ninth time this has happened at this year’s event – with California’s David ‘Dragon’ Pham the leading previous champion going out in 37th place for $15,148 as the top 171 were paid.

Still, other former winners did cash in the tournament, and they were JC Tran (151st), David Diaz (89th) and Andrew Cohen (49th).

Third place went to Britain’s Thomas Middleton ($305,015), while New York State’s Thomas Miller – a former architect who gave up his job to become a poker pro – ended as our fourth-place finisher for $219,885, having started the final day as chip leader.