This time, Mike “The Mouth” let his chips do the talking en route to a convincing victory in Event #13 – $5,000 Seven Card Stud Hi-Low Split. 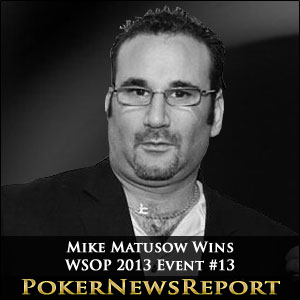 This time, Mike “The Mouth” let his chips do the talking en route to a convincing victory in Event #13 – $5,000 Seven Card Stud Hi-Low Split.

F**k the haters! were the first words out of Mike Matusow’s mouth after winning his fourth WSOP bracelet, and first in five years. His enthusiastic rants were quickly followed by the obligatory emotional meltdown Mike has become so well known for, as he choked through tears while his supporters looked on. Love him or hate him, Mike Matusow has a passion for poker hardly seen in today’s top pros.

The victory was extra sweet for Mike as at the beginning of the year he had all but been written off from ever winning a major poker tournament again. But “The Mouth” fought bravely through a tough field of 210 players, which included multiple bracelet winners and past Stud Hi-Lo champions, to win gold.

Play on Friday began with 20 players, all of whom had already qualified for their share of the nearly $1 million prize pool. Although Limit Stud Hi-Lo is considered a very slow, calculated game, players were eliminated in rapid succession. By the first break, only 13 players remained, with another four dropping out over the next two levels, including 2011 champion Eric Rodawig.

The frenetic pace continued until only four players remained: Matusow, young pro Matthew Ashton, Mike Leah and rising star David “Bakes” Baker. Shockingly, it was already Baker’s and Ashton’s second final-table appearance in the young 2013 WSOP. Baker could never overcome his short stack and after holding on for a while, was eventually eliminated in 4th.

Chip leader Leah then began to spew badly, equally distributing his chips to Ashton and “The Mouth.” All throughout, Matusow rarely showed a losing hand, and never lost his composure. As someone who makes a public display out of his misfortunes, it was good to see Mike remain relatively under control.

Mike would whittle away at Ashton, overcoming a moderate chip deficit to take the lead. On one of the final hands, Mike made an Ace-high flush and a 6-low to scoop a massive pot. Ashton never showed his hole cards, but given the action and his up-cards, it is relatively safe to assume that he had a straight and inferior 6-low. What a cooler.

After what seemed like an eternity, “The Mouth” was declared victorious, and the excessive celebration began. Matusow’s fateful stuck around until past 3 am to see him take down his fourth bracelet. Coming on the heels of his win in that year’s National Heads-Up Tournament, 2013 has proven to be a rebound year for “The Mouth,” who at least for now is both talking the talk and walking the walk.