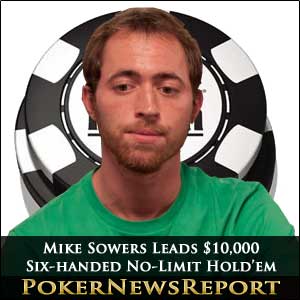 North Carolina’s Mike Sowers leads the field after day two of event #46, the $10,000 Six-Handed No-Limit Hold’em Championship, at the World Series of Poker (WSOP) in Las Vegas as 22 survivors chase the biggest prize so far of this summer’s series.

Having started out with 474 entries at the Rio All-Suite Hotel & Casino on Monday, the field was yesterday chopped down from 162 players over 12 hours and 10 levels with a $1,158,481 first prize and gold bracelet on offer.

He has already accumulated 486.25 points to be over 60 points above his closest rival – and that is before this event finishes!

Grospellier is also looking to pick up a second gold bracelet this series after winning the $10,000 Seven-Card Stud Championship and sits 18th with 299.25 points on the POY leaderboard. He is certain to move up the table – no mater his final placing at this event.

Lifting two gold bracelets in one WSOP is extremely rare, but to be in with a shout of winning a Championship double is incredible, so Grospellier and Lamb will no doubt be doing everything within their powers to take down event #46 as the POY race hots up.