Mike Sexton In, Tony G Out of Big One Charity Event

Just when it seemed at least 42 players would take part in the $1 million buy-in The Big One for Big Drop at the WSOP, Party Poker Pro Tony G has pulled out. 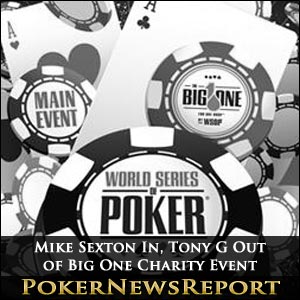 Just when it seemed at least 42 players would take part in the $1 million buy-in The Big One for Big Drop charity event #55 at the World Series of Poker on July 1 over three days, Team Party Poker Pro Tony G has pulled out – to manage the Lithuanian basketball team!

The 38-year-old, who had been expected to play in the No-Limit Hold’em event in Las Vegas for Guy Laliberté’s charity, will still be in the USA but on tour his national side, which will take part in exhibition matches in Houston before moving on to Venezuela at the start of next month.

While Tony is off enjoying his other job, fellow Team Party Poker Pro Mike Sexton announced that he will be joining the likes of Patrik Antonius, Sam Trickett, Tom ‘durrrr’ Dwan, Gus Hansen, Erik Seidel and Daniel Negreanu in the charity competition at the Rio All-Suite Hotel & Casino next month.

So, having hit 42 starters, The Big One is back down to 41 confirmed participants, with $111,111 from every million dollar buy-in going to The One Drop charity in their aim to provide clean water for all in developing nations.

But who will pay up the million bucks to take up Tony G’s place? Will it be Phil Hellmuth? Or maybe Ben Lamb? Then again, how about Jean-Robert Bellande? Well, we should all know very soon…

World Poker Tour (WPT) commentator Sexton, meanwhile, believes that it would have been almost impossible to pull together such a tournament without the charity aspect of this tournament, while he also stressed that Laliberté had a vision to stage this event and knew it would create tremendous publicity for his charity.

The one-time WSOP bracelet winner also emphasised that, while there will be numerous rich business associates of Laliberté’s playing in the most anticipated event in poker history, no one should expect the business entries to be suckers at the poker table – because they’re not.

In fact, the 64-year-old – who has pocketed over $4.2 million from live tournament cashes – pointed out that Laliberté has made a final table on the WPT from fewer than four events, while a player such as Bob Bright regularly plays in the biggest No-Limit game in Vegas… and is a winner.

Sexton also had a few words for his absent team-mate. He wrote on his PartyPoker blog: The only question I have is, ‘Tony G, where are you?’

I can’t believe this! It’s the biggest rail I’ve ever seen. I’ve been waiting years for this. I want to thank all of my adoring fans for coming out to see me.

– A cheeky Ali Eslami addresses a jam-packed rail, obviously playing to the crowd who had gathered to see the likes of Phil Hellmuth and Phil Ivey trying add to their large gold bracelet collections.

Look at the bright side, Carlos. Tonight, you’re going to bed broke, but at least you won’t go to bed curious.

– Gavin Smith ‘consoles’ Carlos Mortensen, having seen the two-time WSOP champ call for his whole chip stack on the river and lose out on a huge pot after his opponent revealed a massive hand – before the Spaniard then hit the rail soon after.