Mike “Timex” McDonald , one of the ten members of the Epic Poker League´s Standards and Conduct Committee, has won the second EPL Main Event after a colossal final day – most of which he spent short-stacked. 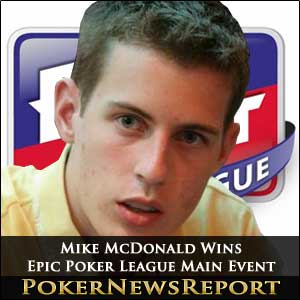 Mike “Timex” McDonald , one of the ten members of the Epic Poker League´s Standards and Conduct Committee, has won the second EPL Main Event after a colossal final day – most of which he spent short-stacked.

In a truly remarkable day, Mike McDonald showed great perseverance and skill to first remain in the event and to then claim the EPL 2 title, Champion´s ring and a first place prize of $782,410.

From Seventh to Heaven

Having started the day in seventh position of the remaining eight players, McDonald had to endure a 5½ hour session when the table was four-handed with the threat of elimination always hanging over him, and a further three hours of fighting for survival when the table was down to just three players. It was only when McDonald eliminated Fabrice Soulier in third place that he had a sufficiently adequate chip stack to take on day long chip leader, David Steicke – a position which he used to his advantage to wrap up the heads-up within 30 minutes.

All Eyes on Steicke and Seidel at Start

When the day started, there was no indication that it was going to result in an eleven hour marathon, as the two chip leaders flip-flopped position through the early exchanges. Erik “FTP shareholder” Seidel (A♣ A♦ – again!) opened up a gap at the head of the field when eliminating Dutch “Pokerspot” Boyd (J♥ J♠) and nobody really noticed when McDonald (K♦ K♥) took out Sean Getzwiller (A♥ K♣) in the battle of the short stacks. David Steicke got back on level terms with Seidel when the 4♥ on the river gave Steicke a set of fours over Isaac Baron´s flopped set of threes, and Baron was the next player to depart when his Q♠ 10♠ only found two suited cards on the board and ran second to Fabrice Soulier´s A♥ 10♣.

After only 46 hands of the final table, the field was reduced to half its original size when Nam Le (A♠ K♥) moved all-in on Fabrice Soulier (J♠ J♥). The J♦ on the flop gave Soulier the hand, and the final qualifier to be knocked out walked away with $126,570 for his $1,500 buy-in into the Pro/Am. Soulier´s two eliminations left him in a far more comfortable position with the two chip leaders and McDonald still the short-stack

McDonald Takes Some of Soulier …

After more than an hour of tentative raising and folding between the four players, Mike McDonald put his tournament life on the line for the first time. 4-betting Fabrice Soulier to put himself all-in pre-flop, McDonald turned over 4♦ 4♠ and looked in big trouble against Soulier´s 10♦ 10♣. Fortunately the 4♥ was dealt on the flop and McDonald could breathe again. An hour later, and with a dwindling chip stack, McDonald did it again with fours. This time he was ahead against Soulier´s A♦ 8♥, and stayed there when the 4♣ completed his set on the flop.

… and Then Steicke Takes a Bite as Well

Just Three Left at the Table

Three-handed play started in much the same way as the four-handed – tentative. With blinds of 15,000/30,000 (ante 5,000) most of the pots went to the player raising on the button, and the pre-flop action meant that only two hands went to showdown in the next one hundred. In both of these Michael Steicke was the beneficiary – taking 250,000 chips from Fabrice Soulier when his 8♥ 7♠ paired with the 7♦ on the river, and a further 120,000 from Mike McDonald when he managed to claim the pot with K♣ high.

Eventually something had to give, and four days of tournament poker were resolved in just 30 minutes. First McDonald (A♣ Q♦) overcame Soulier´s (A♥ 10♥) shove to eliminate the Frenchman and move within 800,000 of David Steicke. Then McDonald doubled up with 6♦ 6♠ against Steicke´s A♣ Q♥, and it was all over eleven hands later when Steicke moved all-in with K♠ 2♣ and could not connect with the board, enabling McDonald (A♦ 4♥) to win with an ace-high and start his 22nd birthday celebrations a day early.