Mike McDonald takes the biggest stack of chips to the final table of the WCOOP Super Hi-Roller event after a massive slice of luck saved him from elimination. 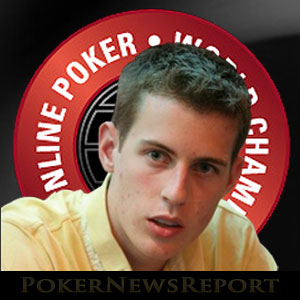 Mike McDonald takes the biggest stack of chips to the final table of the WCOOP Super Hi-Roller event after a massive slice of luck saved him from elimination.

The World Championship of Online Poker (WCOOP) hosted a new tournament last night – a Super Hi-Roller event with a $51,000 buy-in. By the time late registration closed, 46 players had taken their seats and created a prize pool of $2.3 million which will be shared out between the top six players.

At the close of Day 1 (of the two-day event), Mike “Timex” McDonald” is in pole position to win the WCOOP bracelet and $851,000 first prize, after enjoying a massive slice of luck during the twelfth of the fifteen levels that were played yesterday.

Moving all-in with A♠ 5♠ against Fedor “CrownUpGuy” Holz (A♦ K♣), McDonald spiked the 5♦ on the river to double up his stack and move into the chip lead. McDonald extended his lead soon after, when he bust Jason “carrycakes” Mo in eighteenth place (K♦ K♣ > A♣ K♠), and Nick “caecilius” Petrangelo in twelfth place Q♥ Q♠ > 7♦ 7♣.

How McDonald Nearly Skipped the Event

At the beginning of the month, Mike McDonald had every intention of playing in the WCOOP Super Hi-Roller event. McDonald even started a thread on 2+2 in which he was auctioning off 25% of his action and reckoned that he would swap about 35% to 45% with other players.

However, as the tournament got underway, McDonald had reservations about taking his chances in such a strong field. He told PokerNews´ Frank Op de Woerd that he nearly skipped the event due to it being “much tougher than my expectations”.

However, after several “weaker” players entered the WCOOP Super Hi-Roller towards the end of late registration – and some of the chips started going their way – McDonald felt that he had a reasonable opportunity of getting into the money. We reckon those who staked him, swapped with him or bet on him at 14/1 on the PokerStars sportsbook will be pretty happy this morning.

The final table of the WCOOP Super Hi-Roller will commence at 6:30pm (BST) tonight. The tournament will resume at the beginning of Level 16, with blinds of 1,250/2,500 (ante 325) and with five of the remaining players looking assured of a cash:

Two of the final eight players earned their entries into the Super Hi-Roller through satellite events – Jose Angel “Cejakas14” Latorre won his seat in a $4,340 buy-in hyper-turbo qualifier, and “Nopaleva” was one of two Russians to win their seat via a 25,000 FFP qualifier.

Whereas Latorre is a well-known high stakes online Sit & Go player and live tournament specialist, little is known about “Nopaleva” other than this event is way beyond his usual buy-in (usually no higher than $50.00) and his best cash so far this year is $1,416 for when he took down a 103-player MTT back in May!

Who Didn´t Show Up for the Super Hi-Roller

The turn-out for the WCOOP Super-Hi Roller was surprisingly low. A week or so ago, Daniel Negreanu (who finished in 30th place) was predicting 60-80 players would take part in the event. Some observers were predicting that it would attract more than one hundred players; and although some of the most famous high stakes players in the world took a stab at winning one of online poker richest tournaments, there were plenty who didn´t.

Chris Moorman, Bertrand “ElkY” Grospellier, Justin Bonomo, Phillip Gruissem and Phil Galfond were all no-shows after featuring at the top of PokerStars´ own betting for the event. Jason Somerville was largely expected to enter and provide a live commentary via Twitch – but didn´t – while some players entered (including our own tip for the event – Andrey “I am Bobbie” Streltsov) and then unregistered before the tournament started.

Some of those players who did not show up for the Super Hi-Roller may be looking at Mike McDonald´s chip lead this morning and wondering “what if”. Others may be doubting whether his good fortune can hold up all the way until the end of the tournament. You can find out whether Timex gets his timing right once again tonight by railing the action live on PokerStars from 6:30pm (BST) this evening, or by following @PokerNewsReport on Twitter.