Mike McDonald leads the Aussie Millions $100K Challenge after a crazy day in which there was more action at the cashier´s cage than there was on the tables. 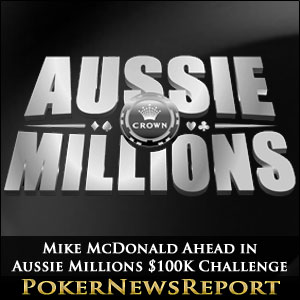 Mike McDonald leads the Aussie Millions $100K Challenge after a crazy day in which there was more action at the cashier´s cage than there was on the tables.

Day 1 of the Aussie Millions $100K Challenge was an astonishing day. The structure of the tournament allows for unlimited re-entries until the start of Day 2, but some players did not know when to throw in the towel.

Both Daniel Negreanu and Isaac Haxton entered the event five times after busting out during the early levels, and although Negreanu has got a stack to carry forward to tomorrow´s action, all five of Haxton´s bullets ended in failure.

Negreanu and Haxton were not the only players prepared to invest obscene amounts of money in pursuit of a seven-figure payday, as Christoph Vogelsang, Tom Dwan and Doug Polk all fired two bullets, while Dan Shak and Paul Newey each contributed AU$300,000 to the prize money.

At the tables, the action was relatively subdued. The format of the Aussie Millions $100K Challenge is that each player starts with 100,000 chips with blinds starting at 200/400. Only pot limit bets are allowed pre-flop and consequently the first person to act in the post-flop action normally takes down the hand uncontested.

The action is supposed to be speeded up by the introduction of a “shot clock” which allows players only 30 seconds to make their betting decisions, but each player was issued with a “stop-the-clock” button that they can choose to use if they want a little more time; and, with most of the pots being won by post-flop raises, neither the shot clocks nor the stop-the-clock buttons saw much action.

Record Number of Entries – with More to Come

Although there were only forty or so players competing in the tournament, the record for the number of entries into the Aussie Millions $100K Challenge was smashed to pieces. Thanks to the contributions by Negreanu, Haxton et al, the current entry for the event stands at 66 – almost double the previous record when Sam Trickett took down the event for AU$1,525,000 in 2011.

It is more than likely there is more to come. Issac Haxton has already indicated that he is going to fire a sixth bullet, Tobias Reinkemeier and Dan Smith have also hinted that they will re-enter the Challenge, and several players who have made the final table of the Aussie Millions Main Event might also decide to get involved in the tournament rather than use their scheduled day off to relax.

At the close of play on Day 1 of the Aussie Millions $100K Challenge, twenty-nine players had chips left to bag and tag. Among those not shown in the top ten chips counts below, Daniel Negreanu has 221,500 chips, WSOP Main Event Champion Ryan Reiss has 208,500 chips and runner-up to Sam Trickett in the 2011 event – Tony Bloom – has 171,000 chips.

Of Interest: Our team found an interesting comment on the 2+2 poker forums dating back from 2011 in which Daniel Negreanu had written:

Maybe tomorrow we will see more of his skill and less of his money!