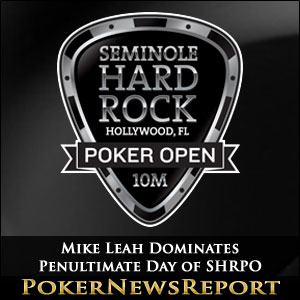 Day 4 of the Seminole Hard Rock Poker Open saw eighteen players returning to the tables – each having already locked up $59,865, but all looking for a seat at the 6-handed final table which would guarantee a $324,000 payday en-route to the first prize of $1,446,710 first prize and prestigious Seminole trophy.

Coming into the penultimate day of the event, Martin Hanowski (5,880,000 chips) had a healthy chip lead over John Dolan (5,290,000 chips) and Brian Hawkins (4,290,000 chips), but there was plenty of big names queuing up behind – including Shawn Cunix, Joe Kuether, Mike Leah and “One Drop” winner Daniel Colman.

There was no hanging about when play got underway at the Seminole Hard Rock Casino, and within the first level five players hit the rail. Ron Ostrow departed in the very first hand when his 6♠ 6♥ failed to improve past Lenny Duvdivani´s J♥ J♦; and Ostrow was quickly joined on the rail by Farhan Madhani (8♦ 4♥ < Natasha Barbour´s A♦ J♠) and Jacob Naquin (2♣ 2♠ < Martin Hanowski´s 8♣ 8♠).

Matthew Sedgeman failed to connect with the board to be bust in fifteenth place by Daniel Colman (7♠ 7♥ > A♦ 10♦), but Uri Kadosh was remarkably unlucky to be eliminated in fourteen place – getting all-in with Q♥ Q♣ against Mike Leah´s 9♠ 9♦ (after Daniel Colman had folded 9♥ 7♥ face up) and Leah hitting his one-outer 9♣ on the flop to make a set of Nines.

The pace of eliminations during the second level of the day was not so quick. Mike Leah joined Martin Hanowski at the top of the leaderboard when eliminating Russell Thomas in thirteenth place (Q♥ Q♠ > A♦ K♥), and then the last lady standing – Natasha Barbour – was bust in twelfth place after committing the last of her chips with A♠ 4♣ and failing to find the Ace she needed to improve past Daniel Colman´s 7♠ 7♣.

Almost immediately Curt Kohlberg was bust in eleventh place when Joe Kuether paired both his cards (A♦ J♣) to best Kohlberg´s pocket Nines and, as the ten remaining players converged on one “unofficial” final table, the relative chip stacks looked like this:

Mike Leah moved into the chip lead when busting Roman Valerstein in ninth place A♠ K♥ > K♣ J♥, and then Brian Hawkins was bust in eighth place with K♥ 9♥ on a nine-high flop against Daniel Colman´s A♥ A♣.

Leah and Colman seemed to be running away with the Seminole Hard Rock Poker Open – especially after Blake Bohn had doubled up against Martin Hanowski – but throughout Level 31 Mike Leah built his stack up beyond 14 million chips as the blinds rose to 50,000/100,000 (ante 10,000) and the pace of the action tightened up.

The last of Bohn´s chips went in shortly after in response to a pre-flop three-bet from Mike Leah. Leah made the call and the cards were on their backs:

Bohn was a 60/40 favourite to double up in the hand until the flop of 8♦ 7♥ 5♣ paired Leah´s hand. Bohn still had chances of surviving if he could pair either of his overcards – but the Turn (3♦) and River (10♣) blanked for him, eliminating him in seventh place and giving Mike Leah a commanding advantage for when play resumes at the Seminole Hard Rock Casino this afternoon.