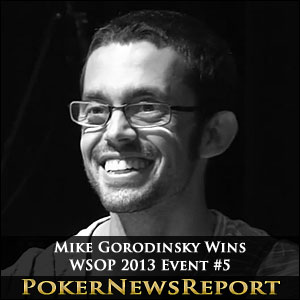 Although he might not be the most recognizable name on the poker scene, no one doubts Mike Gorodinsky’s ability on the green felt. The mixed game specialist recently won his first bracelet and biggest live tournament score to date by taking down the $2,500 Omaha/Seven Card Stud Hi/Lo event at this year’s WSOP.

Gorodinsky openly admitted that the two games featured in Event #5 were not his best games, but apparently that didn’t matter as he virtually cruised to the final table. At the end of Day 1, the 27-year-old poker pro was third out of the remaining 162 players. On Day 2, Gorodinsky’s tournament life was never at stake, as he cruised to the chip lead.

The final table would not prove as easy, as by the time Gorodinsky was heads up with Kristopher Tong, he was staring at a nearly insurmountable 3-to-1 chip deficit. But that didn’t deter the young pro, as he fought back valiantly. After battling back and forth with Tong, Gorodinsky would take the chip lead, only to lose it shortly thereafter.

At one point in the match, Gorodinsky was left with only 320,000 chips to Tong’s nearly 2.5 million. While playing Stud-8, Tong picked up a disguised trip deuces on sixth street, leading Gorodinsky to check-call a bet on seventh street from Tong. Gorodinsky quickly mucked and was left crippled. Whereas most players would simply give up, Gorodinsky fought back with gusto, scooping several critical pots to retake the chip lead against the hyper-aggressive Tong. The final hand saw Gorodinsky and Tong racing with Gorodinsky making a King-high straight after only five streets. Talk about destiny.

Tong’s second place finish was good for over $134k, but given that he had Gorodinsky against the ropes several times in the heads-up battle, the amateur was left wondering what could have been.

Before winning Event #5, Gorodinsky’s biggest score was his win at the Pokerstars Caribbean Adventure $5,000 8-Game Championship. The victory was good for $105k, and established Gorodinsky as a force in the mixed games arena.

Also of note, the final table of Event #5 was the first of this year’s WSOP to feature a woman player. Julie Schneider busted in eighth place, good for almost 20 grand. Last year, 14 women were featured at final tables, setting a WSOP record.