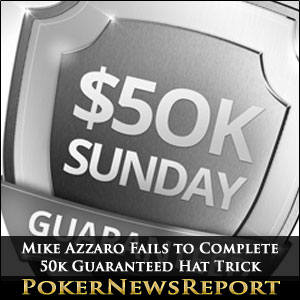 Winning an online tournament featuring the likes of Jamie Kerstetter, Scott Baumstein and Bobby Oboodi once is an impressive accomplishment. Winning it twice is a nearly unparalleled feat, especially if the wins come in back-to-back weeks. But that’s exactly what relative newcomer Mike “MikeyCasino” Azzaro did during NJ.PartyPoker’s first two weeks in the iGaming market.

Unfortunately, the Yonkers native failed in his bid to win Party’s largest buy-in tournament, the 50k Guarantee, an unprecedented third successive time. But he wouldn’t go without a fight, navigating through nearly two-thirds of the field before succumbing in 97th place.

In total, the tournament drew 269 runners, up from 265 last week and 173 the week before. Yet despite the increase in entries, the tournament would fall just short of its guarantee, necessitating 271 entrants to surpass the $50,000 prize pool.

After Azzaro’s second victory, skeptics like Borgata regular Alex Rocha joked that NJ.PartyPoker tournaments were rigged; insinuating that the odds of one player winning back-to-back titles were nearly impossible. Perhaps now, his concerns will be laid to rest.

Azzaro has only been traveling the local circuit for about a year. As a resident of New York, he travels to Atlantic City to participate in the Garden State’s Sunday majors. Thus far, his trips to AC have proven quite profitable, netting him over $15,000 in tournament winnings over a two-week span. In order to compete for real-money on NJ.PartyPoker.com, runners must be geolocated within the Garden State’s confines.

When asked about his feat, Azzuro cited that his first victory was a real grind to the money, and that he needed to make a tough call on the bubble to double up. Azzaro would hold a roughly average stack until reaching the final table, when he would begin to really chip up.

His second victory would prove much easier, as he would be on the right side of a three-way cooler. With less than 40 runners remaining, Azzaro would get it all in with Aces over Kings and Queens. From there, it was relatively smooth sailing.

In preparation for this week’s online festivities, Azzaro participated in a tournament at Foxwoods Resort Casino, but barring a deep run he was committed to returning to New Jersey to defend his title. He is currently giving serious thought to relocating to New Jersey in pursuit of a career as a professional online player.

PartyPoker’s 50k Guarantee goes off every Sunday night at 7:30 p.m. local time. It coincides with the site’s promotional welcome freeroll: New Jersey’s Next Poker Millionaire. As expected, volume on Party is generally at its weekly high during these events.

And in case you were interested, a player that goes by the name of “phatdaddy” was the winner of this week’s 50k. His victory was good for $8,250.