UK poker player Tom Middleton led the EPT Barcelona Main Event at the start of Day 4 and was still in the lead when the chips were bagged at the close of play. 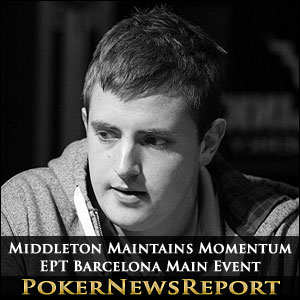 UK poker player Tom Middleton led the EPT Barcelona Main Event at the start of Day 4 and was still in the lead when the chips were bagged at the close of play.

Almost five action-packed levels were completed during Day 5 of the EPT Barcelona Main Event, during which the starting field of 79 was reduced to just 24. Play was halted when 2011 WSOP Main Event runner-up Martin Staszko was busted by Niall Farrell A♦ K♥ > K♣ 7♦ to reduced the field to the three tables of eight who will re-convene at the Casino d´ Barcelona this afternoon.

At the top of the list when the chips were bagged and tagged was UK poker player Tom Middleton (3,986,000 chips), who bust Brazilian Douglas Souza K♦ K♣ > 10♥ 10♦, tormented Austrian Julian Thomas (who is now the shortest stack of the 24 players who remain) and built on his stack during the last levels of the day.

Middleton will start Day 5 of the EPT Barcelona Main Event 28 Big Blinds ahead of Alejandro Perez Torres (3,300,000 chips) – one of only two Spanish players remaining in the tournament – with EPT9 Online Qualifier of the Year Anaras Alekberovas (2,638,000 chips) a further 27 Big Blinds behind.

It is usually around this stage of an EPT Main Event that the names of previous winners who are still in with a chance of becoming the first player to capture two EPT Main Event titles get mentioned – but unfortunately that will not be happening in Barcelona.

Three former EPT champions were still in contention at the beginning of Day 4 but, in the very first hand of the day, last year´s Barcelona champion – Mikalai Pobol – ran his A♦ Q♣ into the 9♣ 9♥ of Glib Kovtunov, and Pobol was aware of his fate quickly when two Nine on the flop improved Kovtunov´s hand to Quads.

One level later and the EPT Barcelona champion from 2010 – Kent Lundmark – was busted out when calling a post-flop shove from Pasi Sormunen with Q♦ 10♦ on a flop of 10♥ 2♦ 7♣. Unfortunately for Lundmark, Sormunen had flopped a set of Deuces and Lundmark was eliminated from the tournament in 64th.

Finally this year´s PCA Main Event winner – Dimitar Danchev – had his 400,000 chip stack reduced to dust in an unreported hand and, after collecting his prize for his 44th place finish, tweeted that he was done and would see everybody in London rather than jump into the EPT Barcelona High Rollers Event.

As the levels progressed, and players´ stacks were worth fewer blinds, several players benefitted from “miracle hands” to place themselves in a challenging position. Last woman standing – Germany´s Jamila Von Perger – hit a two-outer on the River when her 4♥ 4♦ was coming second to Florian Duta´s paired A♠ 9♣, and Kimmo Kurko chipped up into fourth place on the leaderboard after rivering an Ace to eliminate Ivey Poker´s Kevin Vandersmissen A♠ J♣ > Q♥ Q♦.

Italy´s Luca Fiorini had two good strokes of luck – turning a set of Eights to best Sergei Chantcev´s paired Ace, and then hitting a runner-runner diamond flush when fully committed with 9♦ 9♠ against the paired Ace of Rapheal Halfon (A♥ K♥). Fiorini´s double miracle enabled him to finish the day with a slightly above average chip stack of 1,607,000 chips, while Jamila Von Perger still has work to do with her relatively diminutive 712,000 chips.

When play recommences at the Casino d´Barcelona players will have about twenty-five minutes left in Level 24 (blinds 12,000/24,000 – ante 3,000). Play will continue until a final table of eight players is resolved, and those with the best chance of appearing on the EPT Barcelona Main Event Final Table include:-