PokerStars is promising the richest low-stakes tournaments in poker when MicroMillions returns from 16th to 30th July. During the series, millions of dollars will be paid out in prize money across 121 tournaments, plus two lucky players will win Platinum Passes to the PokerStars Players Championship next January. 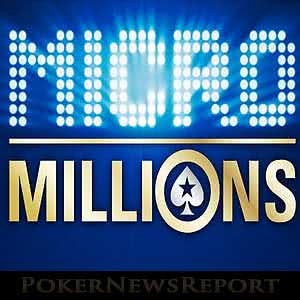 PokerStars is promising the richest low-stakes tournaments in poker when MicroMillions returns from 16th to 30th July. During the series, millions of dollars will be paid out in prize money across 121 tournaments, plus two lucky players will win Platinum Passes to the PokerStars Players Championship next January.

Since March 2012, PokerStars´ MicroMillions series has been the most prestigious low stakes tournament series in the world of online poker. With buy-ins for the tournaments starting as low as $0.11, every player has the opportunity to get involved and turn a modest amount of small change into a decent bankroll. Consequently MicroMillions events often attract tens of thousands of players.

To demonstrate the popularity of the series, last year´s Main Event attracted more than eighty-five thousand entries and paid more than twelve thousand places deep. MicroMillions 14 from 16th to 30th July is expected to be no different. The 121 tournaments scheduled for the series includes an excellent range of poker formats and varieties, and a million dollar guaranteed Main Event on Sunday 29th July.

To support the series, PokerStars will be running a special edition of its Spin & Go games in which players can win tickets to MicroMillions tournaments, giving away more than $50,000 in free tournament entries in random “ticket drops”, and offering players who enter five or more MicroMillions events the opportunity to win a Platinum Pass to the PokerStars Players Championship next January.

The free tournament entries will be given away in random ticket drops during MicroMillions tournaments played between the 16th and 29th July, while players who opt into the PokerStars Players Championship promotion and then enter five MicroMillions events will automatically be entered into an All-In Shootout on Tuesday 31st July with two $30,000 Platinum Passes up for grabs.

Further Ways to Win a Platinum Pass in July/August

The MicroMillions series is not the only opportunity players have to win a Platinum Pass in July and August. On the first Saturday of each month, PokerStars hosts further All-In Shootouts for players who have:

There will also be a Stars Reward Freeroll Giveaway on Sunday 5th August for players who have won a special PSPC Sit & Go game. Tickets to PSPC Sit & Go games are awarded via the Chests Rewards program, and you have to win your Sit & Go game in order to qualify for the freeroll giveaway in which one PokerStars Players Championship Platinum Pass will be up for grabs.

Plenty More Going On (All the Time) at PokerStars

If small stakes tournaments with million dollar prize pools and trips to the Caribbean are not your thing, there is still plenty going on at PokerStars to keep you entertained. The site´s Spin & Goal promotion – in which you can win free bets and cash up to $1 million – is ongoing until July 23rd, while players in certain countries can also take advantage of the Freeroll to Vegas promotion for the rest of the year.

Aside from the promotions, players have the opportunity to test their skills in practically every format of online poker imaginable, win a share of the Deal progressive jackpot, play at the excellently equipped PokerStars online casino, or place bets on a wide range of sports events. The number of opportunities you have to win money at PokerStars is actually pretty amazing; and – during the MicroMillions series – you won´t need a lot of money in order to take advantage of them.