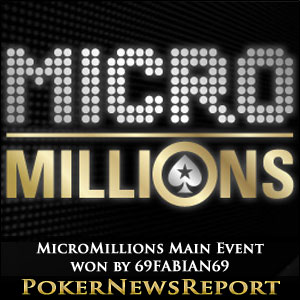 The concluding weekend of MicroMillions7 was another rampant success for PokerStars. The twenty tournaments played over the weekend generated $2.7 million in prize money – bringing the total paid to players over the ten days of the Series to $7,346,272.

The highlight of the weekend was the MicroMillions Main Event – which had a guaranteed prize pool of $1 million, of which the winner was assured $100,000. 57,886 players ponied up the $22.00 buy-in – or qualified through one of the numerous satellites that were hosted over the weekend – clearing the guarantee by a good $150,000 and paying 8,541 places.

The action was fast and furious throughout the whole tournament and, as the game approached the final table, “69FABIAN69” from Hungary and “smokinjenny” from Canada emerged as the two players with the biggest stacks. “smokinjenny” lost a lot of their stack when doubling up Norway´s “sangfugl” K♥ K♠ > Q♣ J♣, and thereafter Brazil´s “dilimAA” became “69FABIAN69”´s closest challenger when eliminating “drunken_aks” in tenth place A♠ K♠ > A♥ 3♦ to set the final table.

With blinds of 1.5 Million/3 Million (ante 375,000) when the final table got underway, there was no deceleration in the pace of the action. “smokinjenny” got back among the chip leaders – doubling up against “berge64” with a pair of Sixes – but “berge64” bounced straight back with a flopped set of Kings to crack “hotumatura77”´s A♦ A♣. “hotumatura77” departed the MicroMillions Main Event Final Table in the very next hand – getting all-in with 8♦ 8♣, but failing to improve past “RoxyDeluxe”´s 10♦ 10♠.

With levels only lasting ten minutes, the average stack was just fourteen big blinds as the blinds rose again to 2.5 million / 5 million (ante 625K). “sangfugl” hit another double-up against “dilimAA” (A♥ K♦ > K♥ 10♦), but then doubled up “stelsn” A♥ 9♦ > 4♥ 4♠ and, with the chip stacks getting closely matched, “69FABIAN69” suggested that the remaining players should consider a deal. “stelsn”, “DilimAA” and “berge64” declined – “berge64” paying the ultimate price by being eliminated in the very next hand by “sangfugl” A♣ Q♥ > A♥ 9♥.

DilimAA Holds Out Against a Deal – Ladders Back up to Third

Two quick eliminations followed in consecutive hands – “stelsn” (A♥ 3♣) failing to connect with the board to improve past “69FABIAN69”´s 7♦ 7♥, and “skomi11” seeing his K♥ 7♣ pair on the River, but the K♣ also completing “RoxyDeluxe”´s (A♣ Q♣) Ace-high flush – RoxyDeluxe now at the top of the leaderboard. Down to five players, “69FABIAN69” again pushed a deal, but “DilimAA” – despite being the shortest stacked player – held out for a “Gamble”.

“69FABIAN69” regained the final table chip lead in a J♦ J♣ > 4♣ 4♦ hand against “sangfugl” which reduced the Norwegian player to little more than one big blind; and “sangfugl” was eliminated from the MicroMillions Main Event in fifth place when his J♣ 8♥ failed to connect with the board against “smokinjenny”´s A♠ 9♠. Unfortunately for “smokinjenny”, her participation in the tournament was to last just a few more hands, and she was eliminated in fourth place when shoving into “RoxyDeluxe”´s 10♦ 10♠ with A♠ 7♦, and failing to find the Ace she needed to stay alive.

RoxyDeluxe Leads into Heads-Up but 69FABIAN69 Bounces Back to Win

The title was almost wrapped up in the first hand of the heads-up – “69FABIAN69” moving all-in with Q♥ 9♠ against “RoxyDeluxe”´s K♦ 2♠ but after the flop and Turn had missed both players, the 9♥ on the River saved “69FABIAN69” and brought the respective chip counts much closer together. The chip stacks stayed pretty much the same for the next ten hands as “RoxyDeluxe” and “69FABIAN69” swapped pre-flop pots, before “69FABIAN69” doubled-up into the chip lead 6♦ 6♥ > K♠ 4♥. “RoxyDeluxe” immediately doubled back A♣ Q♥ > K♥ 9♠, but now the two players were taking it in turns to shove all-in every hand, and eventually one of the shoves was going to get a call.

The final hand came after 12½ hours of play and with blinds now at 6 million / 12 million (ante 1.5 million). From the button “RoxyDeluxe” bet 24.6 million chips from the button – leaving 257 million chips behind – and “69FABIAN69” responded by moving all-in for 294 million. After contemplating the decision for several minutes, “RoxyDeluxe” made the call and the cards were on their backs:

The flop of A♦ 10♠ 2♠ was a dream for “69FABIAN69”, as it left “RoxyDeluxe” needing runner-runner Queens or Eights – or an unlikely double gutshot straight – and the Austrian player was drawing dead after the 4♦ on the Turn. The meaningless 9♠ fell on the River and “69FABIAN69” had won the MicroMillions Main Event for $100,688.

Prior to the MicroMillions Main Event, PokerNewsReport had hosted a freeroll qualifier on PokerStars with twenty seats up for grabs. An astonishing 6,406 players took part in the tournament and, after five hours of play we had our winners. Sadly, none of the twenty players who qualified in the PokerNewsReport MicroMillions Qualifier went on to feature in the climax of the tournament, but congratulations to “deezzor” and “prado_cba” who both cashed in the event and made their participation in our satellite worthwhile.